It’s amusing, or tragic, to see the White House this week doing its dance. They are preparing the way to deny, deny, deny that recession. Doesn’t matter that our conditions will likely qualify by any definition of the term you read in a textbook. These people are shameless. They invent their own reality, in accord with post-structuralist thinking.

Or we could put it in plainer terms: they are lying.

The White House says that even with two consecutive quarters of negative output, we are not in recession. That’s because the labor markets look strong. But that is pretty twisted because it only looks at the unemployment rate, which doesn’t count those who are out of the workforce. In labor participation, right now millions have gone missing, just having given up on life and personal ambition. That’s the truly chilling part of all of this.

We are not just in recession but depression and this is not just about economics. It’s about the human spirit itself. Hope has been drained away, and you can see it in the data or you can see it in the faces of those around you. The lockdowns were catastrophic enough but they were followed by brutal mandates, educational losses, cultural destruction, plus an enormous devaluation of the currency that has already drained away 14 percent of the purchasing power of the dollar.

Let us have a look at consumer confidence surveys as measured by the Organisation for Economic Co-operation and Development (OECD), which has been tracking it since the 1960s. It has fallen off a cliff. I can’t even see how the line could be more vertical. 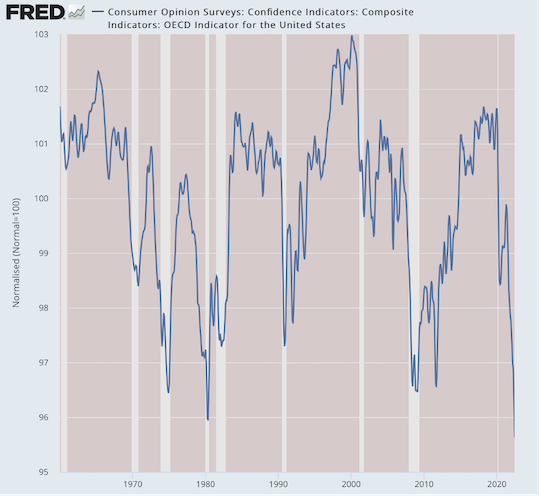 Confidence has never been this low in anyone’s record. But let’s zoom in a bit closer to see how things went. It crashed after lockdowns and then made some effort toward restoration. Do you remember those days? You remember thinking: maybe these people are not utterly and completely sadistically insane? Maybe the Biden administration will see the light and restore basic social and market functioning?

That did not happen. It got worse. Much worse. Now our present times give new meaning to the word worse. 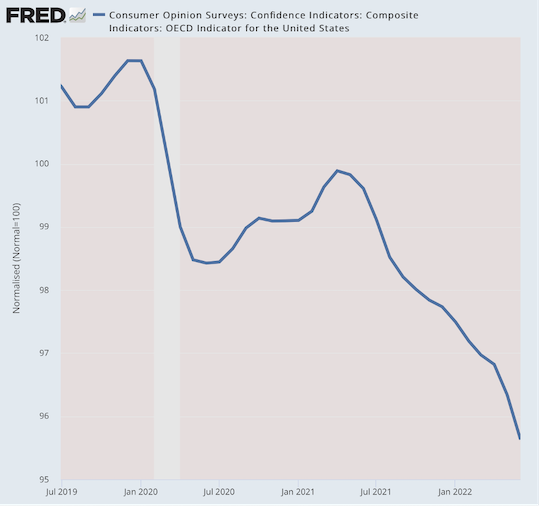 So yes, there is every reason to reject the term recession. Let’s bring back the word depression. That was the common term for a fall in economic conditions before World War II. It changed only after the war to make the word less ugly as if to say we will never go back to that. The word game thing has been going on for a very long time.

Nothing and No One Works

A drill down into the labor market problem produces some terrifying realities. Hotels cannot find workers. Restaurants are cutting hours because they cannot find servers. Airline flights are being canceled because many pilots and flight attendants just left. We’ve never seen this odd combination of high consumer demand, resources available to spend, and yet physical bodies in grave shortage actually to do what is necessary.

What these times have unearthed is an already existing corruption in the American labor markets. There are far too many people out there with high educational credentials and absolutely no skills and no market for those skills. And yet, these people have set their reservation wage so high that they are unwilling to do anything that someone is willing to pay for.

This worked out well for many people for a very long time, as corporations fattened up their administrative apparatus and every company built out a massive back office, dedicated mainly to compliance and paper pushing. As technology improved and their jobs became ever easier, they worked less and less. After a while, it just seemed like money would flow forever even if millions only pretended to work.

My prediction is that these back office jobs will be gradually gutted over the coming several years. And these people will have a very difficult time being repurposed in a labor market that wants actual workers rather than PJ-clad zoomers. They will not downgrade their expectations. It will come as a devastating shock to millions of people who had come to believe that they could get money for nothing forever.

Be clear on the following. The labor shortage is not in administration or management or people who have learned to be in the right place at the right time and watch the money flow in. The labor shortage is for people willing to cook the food, change the sheets, transport the goods, make the software, fix the code, stack the dishes, and so on. In other words, people who actually do stuff will be in high demand but at low prices.

Looking back, the widespread appearance of books on bullshit jobs, boss hatred, work dissatisfaction, and an overall explosion in labor-related litigation were all signs of a coming crisis. All they needed to explode was some one thing to introduce an element of chaos.

The same could be said of government debt, Congressional spending, Federal Reserve money creation, and so on. The U.S. as a country has lived off its capital accumulated in the 1980s for a very long time, while president after president has squandered it on wars, welfare, and wild sprees of payoffs to special interests.

After decades of this nonsense, it truly seemed like nothing could break the system. Crazy theories began to circulate, such as “money monetary theory” which speculated that the central bank could print all the money it wanted to without any real consequences on the value of money or the stability of the economy. That has turned out not to be true, as the devaluation is taking place at a record pace right now.

What remarkable times! The experts are left sputtering. The ruling class lies with impunity. Everyone contradicts everyone else. And everyone seems to be out of ideas on how to fix things or even cover it up anymore. This is the whole reason for the wild political drama on Capitol Hill today: the only way to distract people from the national catastrophe is political persecution. They have a convenient voodoo doll in the person of Donald Trump, who often seems like he was sent by central casting to be their preferred enemy.

For years now, we kept thinking things would get better, that someone would save us from the emerging hell, that cooler heads would prevail, and that someone in charge would rediscover wisdom and truth. That is not happening. We’ve got a population today that is drowning its troubles in substances while the way of life we once knew is being stolen from us piece by piece.