It happens to all of us sometimes: we accidentally bump into mainstream news. It’s so predictable. This weekend, we heard about how inflation is dying out, Biden is doing a great job, a handful of extremists are taking over the Republican Party, Tucker Carlson is evil, the January 6 committee has unearthed new right-wing perfidy, gun control will solve everything, and the earth is still a flaming ball of heat thanks to your use of fossil fuels.

You know the prattle and ritual all too well.

Meanwhile, an actually interesting poll came out of Monmouth polling. For the first time in its polling history, more than half of Americans are actually directly blaming the federal government for their sufferings. This is also reflected in Biden’s popularity today, which sports a 20-point split between approve and disapprove.

My own intuition is that this massively understates the prevailing anger out there. People seem finally to be getting it. It was government that wrecked the world we knew. Among a long list of horribles is inflation. Inflation is a tax of a special kind. It’s nothing but a sinister robbery. It pillages Americans of all the time and effort they put into working for money and transfers it to the elite in government and connected special interests.

No question that most people are fed up too. Among all the issues that animated this anger, inflation ranks up as the top three! As much as we hear about the reversal of Roe v. Wade, only 5% of the public says it is a top issue. This should give a clue: the hope on the part of the Democrats that this would turn around the party’s fortunes are largely dashed. It appears to be a clean sweep of the House, the Senate, and most governorships in November.

What Will the GOP Do?

And then what happens? If history is our guide, nothing much. The Republicans will be so cautious about giving up their public-relations advantage that they will likely sit tight for two years waiting for the big prize of the presidency. To frustrated voters, they will say: give it time so that we can get Biden out of the White House. It’s always the same: just wait.

We’ve been here many times in the past. The change is always in the future. It always requires more political power. Then when they get it, they do things just as bad or worse than the people they replaced. Unless something is very different this time, the Republicans will massively screw this one up as they always do. And then they will be blamed and power will change hands again.

I think back often to the midterm election of 1994. Those were wild days, with all kinds of new radicals being swept into office. They were going to tear Washington apart! But even before the new crop of legislators took office, the party put out a pathetic and pointless “Contract with America” that pushed a lot of good-sounding but ultimately meaningless changes. Spending went up and the administrative state grew ever more powerful. They squandered the chance to make a real difference.

This time, the stakes are much higher. The main reason is inflation. But in order to understand why it is happening, we need some clarity. The cause follows a typical trajectory: massive explosion in government spending, Treasury Department debt creation, and Federal Reserve purchases of that debt to add to its portfolio of junk bonds.

Here is the grim picture of precisely what happened. 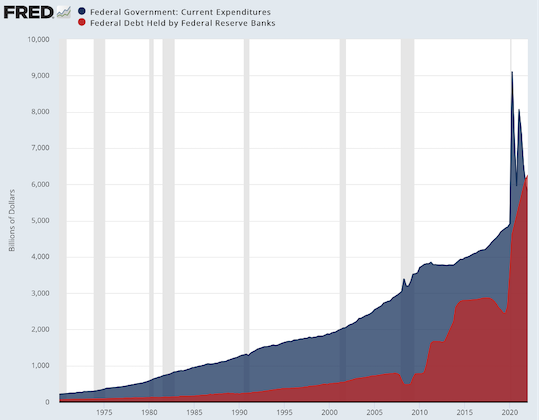 This, my friends, is the fundamental reason for inflation. Absent dramatic economic growth, this new money will need to become endemic through across-the-board price increases. Despite what they are telling you now — that commodity prices are declining at the rate of increase — there is still so much more in the pipeline.

Plus there are many innumerate Americans who do not understand the following: the damage is done. Prices are NOT going back to what they were. Even if the Fed somehow manages to drive the inflation rate to its “target” of 2%, that still means that inflation will get worse. The damage of the last two years will not be undone. That would require a 40% deflation and that won’t happen.

The only way out long term is a flat-out abolition of the Federal Reserve system itself. Ron Paul used to talk about this and even made it a political issue. It could happen again but only against the wild objections of every establishment economic interest in the country.

I strolled by the Fed building on Capitol Hill over the weekend. It is built to look like a permanent bureaucracy. I dreamed that it would someday be converted into a hotel or chip-manufacturing facility.

Candle Burning at Both Ends

Meanwhile, the entire county is living on borrowed time. It’s really bad. The illusory prosperity of 2021 has been revealed as a farce, and now people have depleted their savings and real income is falling dramatically. That is to say: we are getting poorer, and very fast. Here is a look at the underlying reality and an explanation for why people are so very upset. 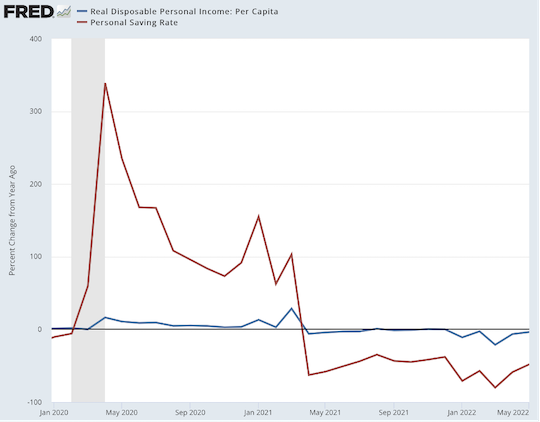 In other words, this is completely unsustainable. Funding for venture capital has fallen for fully 4 years now, which indicates that capital is being depleted and a loss of hope afflicts the finance and investment sectors. Congress can make a difference here with massive cuts and a freeing of the market, but it’s truly difficult to imagine a scenario under which this actually happens. A turnaround is possible but far from probable.

Meanwhile, you turn on the news and it is never about how everything we call civilization is actually under grave pressure. Instead, they tell you that you are driving too much and that you deserve the high prices at the pump. They seem actually to enjoy delivering this pain.

The people will only grow angrier. Either the political class responds in constructive ways or it is going to be plowed under by a populist movement the likes of which we’ve never seen before. A people can only take so much before they revolt.