How long can we continue to make excuses for rising prices? Oh, it’s just transitory. It’s just the normal operations of supply and demand. Hey, we’ve got a few problems with supply chains, all right? Sure, stuff goes up in price, but look what happened with plywood, up one day and down the other. It will be the same with other things. Don’t sweat it.

And yet, it’s a mark of inflation that it does not affect all prices of all goods and services at the same rate. Excess money floating around acts like a heat-seeking missile, finding the fashionable thing and injecting its price-push energy on it, and then moving on to the next thing. If you are looking for some mythical index to rise all in tandem, you will never find inflation in the moment.

What we need to look at are sector-specific tendencies in order to observe the effects of monetary policy on prices. Which takes us to the newest marker: the price of aluminum. It’s up 10% year over year. Recycled aluminum is up 50% over the last year. This is absolutely crushing producers, most conspicuously, the nice people who give us canned drinks and beer.

We normally don’t think that the price of drinks is impacted much by its packaging. We think we are paying for what’s inside. Reality is that costs are spreading broadly among contents, packing, shipping, and marketing, with all that passed onto the consumers insofar as people go along. As a result, the cheap beer you enjoyed last year is no more. Perhaps it is time to stock up.

To be sure, there are always other factors to which one can point to make sense of price increases. A major priority for the Trump administration was trade policy, and it dealt with it wth the only power governments have: to tax its own people. It’s 10% tariff on imported aluminum was nothing but a tax on Americans, even if the Trump administration kept inaccurately claiming that China was paying it. It was always preposterous: no government in the world has the ability to tax any other government. The people paying the tax were American producers and consumers.

It’s been a disappointment to see the Republican party revert to its 19th-century style of promoting tariffs, and just as disappointing to see that the deeply ignorant Biden administration has done nothing fundamentally to reverse course. It has retained most or all of the Trump-era trade policies. America has now turned its back on the progress it made toward free trade since 1948.

As for the effects on price, we didn’t notice them last year because producers were able to absorb those costs. They are no longer able to do so. And the reason, it seems plausible to say, is that prices are generally being pushed up due to the helicopter money that the Fed has dropped on the US economy. Now these factors that otherwise push up prices become real.

The same factors are hitting computers, steel, housing, education, groceries, gasoline, rents, hospitality, flights, and just about everything else too. We aren’t getting hyper-inflation yet, but we are experiencing a level of inflation that is highest in most people’s memory. The Dollar
Store will be adjusting its policies soon enough, without changing its name.

Why Are People Denying This?

The stories about individual commodities going up in price hit and then disappear from the business pages, as if they are one-time events, notable but not significant. Honestly, this completely mystifies me. Have you seen the charts on the percentage change in the CPI year over year? We are looking at trends that are now higher than anything we’ve seen since the Second World War! Why is this not significant? 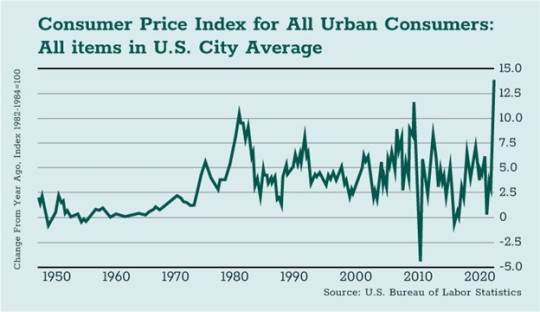 I will tell you why this is not getting popular media attention. It’s because it is politically explosive. The last time the American people dealt with such a phenomenon was 1979. No matter what else the Carter administration did in those years — and it was not all bad because it included deregulation and avoiding war with Iran — there was no saving the administration from disgrace. Inflation tends to discredit governments no matter what else they do.

For this reason, there is a conspiracy of silence at work. But it is not going to solve the problem. Americans can see for themselves what is happening at the store. They can observe the values of their houses, and will feel it intensely the next time that the tax assessment comes around. Already, prices in general are rising much higher than wages are increasing, so what’s called the “wage illusion” will become obvious soon enough.

Look, I’ve been completely open to the idea that all of this is transitory, a result of the reopening of a previously closed economy with plenty of broken supply chains. And so on. But at some point, one has to call it. I look at the year-over-year chart above and see the reality for what it is. We are likely dealing with a serious problem and it is very likely to get worse.

Will The Fed Get the Blame?

The last time we dealt with this problem, the general issue of The Federal Reserve was not well understood. But that seems to have changed in the forty years that have passed. Ron Paul has had bestselling books and the Wall Street Journal’s editorial page is publishing on the topic all the time. Also, The Fed no longer operates in the shadows as it once did. They will continue to try to “pass the buck” but this will not be believable at some point.

In addition, we have the existence of crypto-currency this time around. Bitcoin is hitting $50,000 at the very same time as we have inflation in dollar-denominated goods. So while the dollar is being inflated, we see the opposite in terms of Bitcoin: the price of goods and services expressed in Bitcoin are going down. The timing is not a coincidence. Markets are betting that this magic internet money has a future.

Next week, Bitcoin becomes legal tender in El Salvador, much to the regret of the IMF. It will be an interesting experiment to watch. I have some reservations about the way this change was implemented, but not enough to quell my personal excitement about this. The experience in this one country could prove an example to the world.

In these months of writing this daily newsletter, I’ve been open to the idea that all this turmoil might not be old-fashioned inflation of the sort that vexed the country four decades ago. But it is getting late in the day, and it is probably time to call it and prepare: we’ve got a serious problem on our hands. It’s not just this sector or that. It is very nearly everything. The Fed will do nothing about it until it is too late.

P.S. Late breaking news: The Fed chairman will fix the problem of the 2% target by...moving the target.

Can They Freeze Your Bank Accounts?

The mistake most of us have made has been underestimating the malice and extremism of the governing elite. They have proven themselves to be parasites on the world order.

Is the Revolution Almost Here?

What we see in Australia today might be a look into our own future. States all over the world have overreached.

Prepare for a Very Cold Winter

If you are looking to make money off the coming natural gas shortage, have a look at energy stocks.

The Intentional Destruction of New York

We find ourselves in an emergency situation. The world is tottering between two visions of human life.

Facebook has been fundamentally transmogrified into a PR agency for the state.

My advice is to turn off the television and stop looking at those notifications from mainstream sources on your phone.

The great struggle here is not only economic, not only cultural and social; it is fundamentally psychological.