Below, you’ll find the latest from William Briggs.

Benny Peiser at the Global Warming Policy Foundation asked me to investigate so-called climate attribution studies. I did. They don’t work.

Since that’s too brief a judgment, even though accurate, I expanded the critique somewhat. Here’s the press release:

A paper published today shows that attempts to blame extreme weather on human-caused global warming are “overconfident and probably wrong.” The paper, by statistician and philosopher of science Dr William M Briggs, reveals that mainstream attribution science is beset by flaws of reasoning, modelling and data.

“We simply have little or no idea what the climate would have been without human activity. Moreover, we can’t ever know what it was like.”

And Dr. Briggs also points out that even if we did know, it would still not be enough.

“In order to attribute individual weather events to humankind, scientists need a perfect model of the climate. They do not have this. Therefore, claims that we are responsible for any particular weather event are at best overconfident, if not plain wrong.”

Attribution studies assume that the weather has been getting worse, yet empirical observations do not support this generic assumption.

I owe the title to Andrew Montford, author of The Hockey Stick Illusion, and who blogs as a piece of topography known as Bishop Hill.

If the elite, media, and rulers have learned anything this past year, it is that panic works. Frightening the populace allows them to gain power.

“Oh, Briggs. You exaggerate as always. Nobody really believes they’ll use dangerous global warming as a political move.” 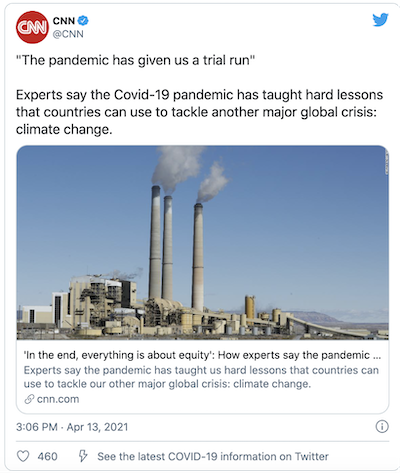 The pandemic has given them a trial run, all right. Yep.

Leaving out all the qualifications and caveats and necessary details — meaning if you want to critique my critique you must read the paper, which is free and which doesn't cost nuthin,’ and not just this post — here is the main problem with climate-attribution studies.

A bad — never good! — weather events are identified, usually because it has just occurred, introducing two observation biases into climate-attribution studies: one because only bad events are examined, and the second because it uses what was just observed.

Quite obviously, if the climate change model is imperfect — I mean this word strictly — it’s estimate of P_1 is useless or highly suspect. Are climate change models perfect? No, sir, they are not. They do a poor job, especially at modeling local extremes. The estimates P_1 therefore don’t have much to do with real life.

Maybe not as obviously, the natural climate model also has to be perfect. Are they? Alas, we shall never know. There is no way to check, no way at all. Ever. It is a model of what the atmosphere would look like if man never touched it. It can therefore not be checked, because man has touched the atmosphere. The estimates P_0 therefore are unknowns.

Comparing two numbers which have too much certainty does not grant certainty, it increases uncertainty.

Add to all this the very real possibility of tuning the models so juice the results in one’s favor, as I suspect some (cited in the paper) have done, and a host of other problems — like how to go about calculating P_i — we conclude climate attribution studies should not be used for any decision making.

Though it is an easy prediction to say they will be used to generate fear.

A prophecy written by John Schroeter…

The Meaning of the Doge

William Briggs weighs in on coronadoom...

The Myth of Artificial Intelligence

A Stop at Willoughby

A Prophecy from John Schroeter…