The upheaval in Cuba is a symbol of something much bigger: the unleashing of political and economic forces that no state can control in the long run. What’s happening there is being repeated in less public and less dramatic ways all over the world. It’s a reflection of the popular discrediting of the public sector in ways that be without precedent in our lifetimes.

You probably shared my feeling in mid-March 2020 when lockdowns kicked off. My sense: something has gone very wrong. This will not end well. Or maybe it will end in the complete discrediting of media, politicians, and the technocratic elite all over the world. The future under these conditions looks extremely unstable in good and bad ways.

We are gaining now a clearer picture, and it is more predictable than we knew at the time. The lockdowns unleashed state power as never before, not just at home but all over the world. Lord Acton said that power tends to corrupt. That’s true. Lockdowns are absolute power and they corrupt absolutely. Everywhere they are tried.

We’ll take a look at the South African warzone on another day. For now, let’s take a closer look at Cuba. The images that average people, gathering spontaneously on the streets — despite internet shutdowns, censorship, and blackouts — are riveting. Perhaps socialism in that country has finally reached its breaking point, three decades after this totalitarian model of social/political organization met disgrace everywhere else in the world.

As I type, internet access for the population has been cut so news is limited. But we know that at least 100 people have been arrested. Popular leaders of the resistance have been arrested. The octogenarian Raul Castro was dragged from retirement to attend an emergency meeting with government.

Is this the end or the beginning of a more brutal dictatorship? Certainly the regime is more unstable than at any time since 1959. Certainly US sanctions against the one-time ally have done nothing for decades but provide the regime a reliable scapegoat for the people’s sufferings. Despite unrelenting emigration and largely quiet anger on the part of the people, nothing until last year and this seems to have fundamentally destabilized the regime. When the military itself is feeling the pinch — when even the elite no longer see a path toward personal thriving — regimes fall. This might be what is different this time.

Lockdowns not only were a main driver of poverty and inequality. They also provided a fantastic pretext for governments all over the world to do to their citizens what they wanted to do anyway, which is to restrict human rights and control every movement of the people. This time they could do it in the name of public health, and with the blessing of science.

The Cuban regime was all about stringencies to control the virus. Cuba was merely following the example of China, Italy, the US, and the UK. It complied with World Health Organization regulations. On March 18, 2020, government seized the moment and imposed all-possible “non-pharmaceutical interventions” that Anthony Fauci and Deborah Birx recommended, including stay-at-home orders and comprehensive orders on any gatherings. One only person in the household could leave to grab groceries, if he or she could find them. By the spring of last year, the stringency index clocked an astonishing 100%, which might be a global record. 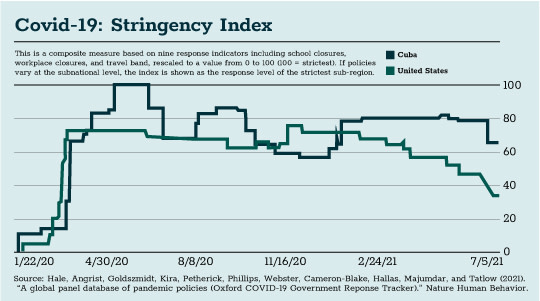 I’ve yet to discover any regime as scrupulous about Covid rules. That was temporarily good for the regime.

For doing this, for taking away whatever few rights the people had — and they were very few in any case — the regime enjoyed huge praise for its brilliant response, precisely as it has enjoyed for decades from partisan leftists. “Cuba’s response to the COVID-19 threat was swift and effective,” writes Ian Ellis-Jones for Green-Left, an Australian information source that can admire Cuba at a safe distance. “Cuba’s response to COVID-19 has been much better than many other countries including the US.”

Cuba’s brilliant scientists came up with not just one but four vaccines! Wrote the New York Times just last month:

“Throughout the pandemic, Cuba has declined to import foreign vaccines while striving to develop its own, the smallest country in the world to do so. The announcement places Abdala among the most effective Covid vaccines in the world.”

What to make of this economic crisis itself? Cuba’s regime controls over enterprise has forced a situation in which the country produces nowhere near the amount of wealth necessary to sustain its population. It must rely on tourism and dollars arriving from around the world. But lockdowns collapsed visits to the once-utopian island paradise by 90%, denying the regime the capacity even to live at others’ expense.

Then on June 21, 2021, the government suspended all dollar deposits in the country, effectively ending a major source of funding not only for business but also government. The official peso-dollar exchange rate was pricing the domestic currency at half the black-market rate, creating an unsustainable situation. The banning of dollar deposits was a desperate act to save the peso from an inevitable tanking.

It’s impossible to know, but the government likely turned to the printing press. The central bank showered the population with pesos, which are now in abundant supply, if you can find something on which to spend them. Prices are heavily controlled with the result of pervasive shortages on basically everything.

Black markets, however, will not shut down. Here we discover the reality. “A bottle of cooking oil used to cost 50 pesos and is now selling for 200,” reports Havana Times. A packet of hotdogs selling for more than twice retail and “powdered milk is being rationed for children and the elderly and sells for 2.5 pesos per bag, but it is selling for 300 pesos on the street.”

An economist formerly working at the Cuban central bank estimates that inflation is hitting 500% and could reach 900% in time. If it gets worse, it could make history. What a remarkable discovery that it is not possible to manufacture wealth in the midst of lockdowns with printing presses running around the clock!

It was these lockdowns — not only in Cuba but around the world — that seems to have flipped the switch. Faced with desperate conditions of no food, no medicine, sketchy power, soaring inflation, and very little of anything necessary to survive, the people seem to have had enough. They have astonished the world by pouring into the streets to demand an end to tyranny.

“Freedom!” they are yelling on the streets. Despite all odds, the Cuban tyranny has somehow survived every bit of pressure to adapt to the modern world. The Covid lockdowns might finally be doing to the system what no amount of outside pressure could ever accomplish. It has inspired the average person finally to say: I have nothing to lose; without freedom, my life is nothing.

What is true in the desperately sad situation in Cuba is also true for the whole planet. Lockdown is nothing but government control of your life. It is incompatible with prosperity, health, peace, and human flourishing. Lockdowns set the world on fire, even raising questions about one of the world’s most entrenched tyrannies.

May the end result inspire a global push for freedom and sounder money. Not just in Cuba.

The Cancellation Crew is Coming

The Cancellation Crew is Coming

Life, Liberty, and the Future of Civilization

Terrible Showerheads are Already Back

So much for the last action of the Trump administration...

Will You Buy a Ticket to Space?

The trouble is that the political class and media are addicted to fear...

How Zoom Took Over the World

An important lesson from The Jetsons...

Are Stablecoins a Government Target?

They have become a genuine challenge to the future of central banking...