There are conspiracy theories. There are conspiracies. And then there are nefarious plans stated openly and frankly. Executive Order 14067 from the Biden administration turns theory into fact. They are ready to go and we are being prepared now. They are embarking on a monetary reform that will bring about a fundamental change in the monetary system and the relationship of citizens to the state as it operates through the financial system. 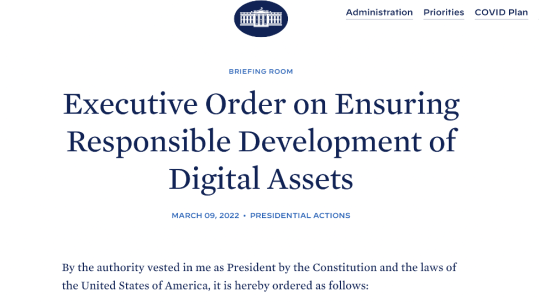 The order states bluntly: “My Administration places the highest urgency on research and development efforts into the potential design and deployment options of a United States CBDC.” CBDC stands for Central Bank Digital Currency. Ever since governments stopped denouncing Bitcoin as a racket and Ponzi scheme, they have decided that they want their own version.

The appeal of blockchain technology has nothing to do with why so many of us fell in love with it back in 2012 or so. It promised a new form of private money that could evade censorship by the state. It was a dream come true for many of us. Finally, we would have a form of money that was entirely controlled by the free market that governments could not get their hands on.

It's been the dream of serious economists for decades. It was finally coming true. Now, that very technology has become a terrifying threat. It can become the basis of a new system of full citizen control through the financial system, something akin to China’s social credit system that controls the entire population based on political loyalty.

I cannot underscore this enough: this is not speculation. This is precisely what the Biden administration has announced. It’s as plain as day. The efforts are ongoing now. Barring heroic political efforts to stop it, it is in the cards. Maybe it takes a year. Maybe ten. Maybe more. Regardless, this is what is happening.

Maybe you have wondered how and why the Fed and the U.S. Treasury let inflation get so wildly out of control. Was it really all an accident? Are they really so stupid as to believe that they can create $6.3 trillion in new dollars, put them hot on the street by delivering them to bank accounts directly, and believe that this would have no effect?

Perhaps it was all deliberate. It’s part of destroying one system to create a rationale for the introduction of a new system.

It All Comes Together

For three years, we’ve lived in a state of confusion and chaos. The government went completely insane to control a virus. Nothing like this has ever happened. We were locked in our homes and hundreds of thousands of businesses were destroyed. Church was canceled. People were arrested for surfing or hanging out at a park. It was madness.

Crucially, none of the new regulations and laws were voted on by Congress. They were imposed by unelected bureaucrats responsible to no one, not even the courts. When courts finally came around and said this is going too far, the bureaucrats responded by denying that the law had any authority over them at all.

Then the economic crisis hit. Savings were depleted. The dollar commenced a slow death in its domestic purchasing power. Big business got huge while small business was crushed.

Then came the vaccine. It didn’t work. But it was imposed anyway. Then we had tests in cities like New York and Boston. To use public facilities, you had to show proof of vaccination. For many people, they had to get the shot or be fired. Later, this vaccine was proved not to stop infection or spread and carried terrifying side effects.

Why did they do it? They needed a trial run of a universal digital ID system that would carry medical information – and any other information they needed to add. It’s true that the system flopped and has been mostly repealed. No matter. They will try again, having learned from their errors.

Think back to the early days of the vaccine rollout. The shot with one dose was quickly denounced and pulled from the market. That was the J&J shot. The others that survived required two shots and two visits to the clinic. Then came the booster. Then another booster. Soon, the FDA and CDC started talking not about getting vaccinated but staying “up to date” on your vaccines.

They were putting us on a subscription plan. This is not only a financial advantage to the producers. It also creates a rationale for constant monitoring of the population for compliance. This model is extremely useful to totalitarians.

Now we are seeing the financialization of the vaccine passport carried on your cell phone. It’s not here yet but it is getting closer. Even to close out a mortgage, banks are requiring that you sign up with RealID, which is a private company on contract with the IRS to provide proof of income and tax compliance. In order to use them, you must give the company the right to control your phone via a downloadable application.

The Next Round of Monetary Upheaval

The last decent monetary reform to take place in this country was from 1869 following the Civil War. President Ulysses Grant brought about a new gold standard that paved the way for decades of economic growth and rising prosperity for everyone. These were the decades that made America what it is.

After that, it was entirely downhill. The Federal Reserve Act passed in 1913 and the U.S. entered the Great War on the promise that the bills would be paid with newly printed money. That started the trend toward endless rounds of booms and busts. The 1920s roared thanks to easy credit but that fell apart in 1929. By 1933, President Franklin D. Roosevelt decided to get rid of the old-fashioned gold standard. In his own version of shock and awe, he issued an executive order that required all Americans to turn in their gold.

Following the Second World War, the system called Bretton Woods put the entire world on a dollar standard. There was no longer any possibility of direct exchange of paper for gold at the domestic level. It could only be done internationally. Then of course that system began to fall apart in the 1960s.

Then in 1971, Nixon closed the gold window and eventually codified a worldwide fiat paper money system that everyone said was the greatest system of monetary management ever. Then of course it wasn’t: we dealt with catastrophic inflation that last a decade until Paul Volker came in to save the day

That was all a long time ago, but the next round of monetary reform is coming now. It will be a central bank digital currency based on the Bitcoin model. It won’t be private. Just the opposite. The great technology called blockchain will be deployed to monitor every aspect of citizen behavior.

Not Complying? Your Accounts Are Frozen

Again, I’m not speculating here. It’s what the executive order says. For example, consider energy use. The order wants information on the

“connections between distributed ledger technology and short-, medium-, and long-term economic and energy transitions; the potential for these technologies to impede or advance efforts to tackle climate change at home and abroad.”

How would that happen? Maybe a new money “could support monitoring or mitigating technologies to climate impacts, such as exchanging of liabilities for greenhouse gas emissions, water, and other natural or environmental assets.”

See how this works? The government can support gas rationing with this currency. It could support meat rationing. It could punish people for donations to causes of which the U.S. government does not approve. It could shut off the ability to spend, travel, or even support a son or daughter in need. Everything you do with your money will become permission only.

Can They Do It?

A feature of blockchains in the private sector is that they are very hard and expensive to build. This is a major reason why all the optimism of five years ago concerning their use in supply-chain management has not panned out as planned. Legacy systems might be technologically inferior but they work whereas blockchain systems require very expensive transitions.

The government will face the same problem with this monetary reform. It will take longer than they expect. What’s crucial here is the aggressive statement of intention. The deep state is in love with China’s social credit system and wants to replicate it. That’s the goal. Now that we know, what will we do about it? We can fight it, to be sure, but mostly we must prepare.

On a personal note: this entire project infuriates me. Cryptocurrency was supposed to save the world, not destroy it.