How Long Do We Pretend that the Fed Is Right?

Two Daily Prophecies ago, we reported on strange economic anomalies that have investors and consumers very worried, among which the threat of inflation.

The news about commodity prices only adds to the existing alarms about its return. It’s finally making the front pages too. Writes the Wall Street Journal:

“The run-up in commodity prices is casting a cloud over the global economic recovery, slamming vulnerable businesses and households and adding to fears that inflation could become more persistent.

The world hasn’t seen such across-the-board commodity-price increases since the beginning of the global financial crisis, and before that, the 1970s. Lumber, iron ore and copper have hit records. Corn, soybeans, and wheat have jumped to their highest levels in eight years. Oil recently reached a two-year high.”

Why stop there? Let’s add housing, cars, shipping, and food. Wages and salaries too. Oh sure, you can come up with every reason for why we see such upward price pressure in all these disparate sectors of the economy.

Surely it’s not... inflation. The Fed doesn’t think it is. If it is, it’s only a bit of inflation, so it’s not a problem. The Fed has got it all under control. Stop worrying!

And yet, one has to wonder. The charts on M2, M3, and the monetary base paint a grim picture. Here is M2, change from a year ago in billions of dollars, 2010 to the present: 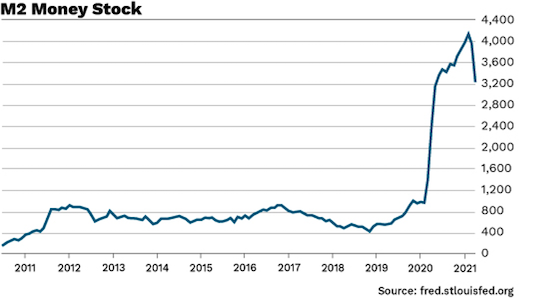 Below is currency in circulation by change expressed in millions of dollars, 2010 to the present: 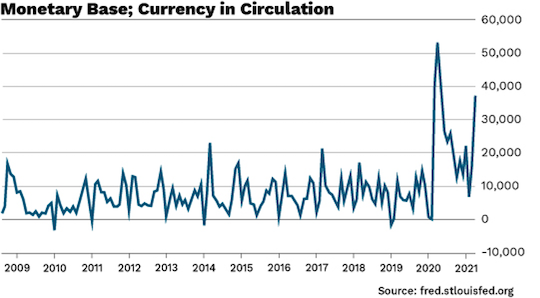 It’s clear what the Fed tried to do here: print the country through the lockdowns. Might it have been a better idea not to lockdown at all? Gobs of paper cannot create all the prosperity destroyed during a full year, plus in which large swaths of the country were deliberately throttled in all economic functioning.

Masking the Lockdowns with Paper

It’s one thing to believe in countercyclical policy. This is something different. This is a shockingly bad lockdown policy with an attempt to cover it up with a monetary policy that approaches being absolutely insane. Not to mention it’s based on no existing theory that has any presence in any academic journal (no, “Modern Monetary Theory” is not a legitimate theory).

It’s as close to “helicopter money” as could exist in the real world — straight from the Fed’s computers to people’s bank accounts, for a solid year.

We learn from Stanford’s Kevin Warsh that:

“Since the onset of the pandemic last February, the Fed has bought 56% of total Treasury issuance of $4.5 trillion. The Fed’s asset purchases represent 76% of the cumulative federal fiscal deficit. And the Biden administration is proposing a $6 trillion budget for fiscal 2022, about a third of which would be unfunded.”

Here is the problem with the theory that all this upward push on prices is unrelated to Fed policy: it pretends as if we cannot see these charts or even read the news. The US has done so well for so long without dealing with inflation that a whole swath of the American ruling class believes now that it probably cannot happen at all. Almost as if the whole history of monetary experience and theory simply do not matter.

Should inflation become a serious problem, we cannot count on people fully to understand the cause. It’s been four decades since we’ve dealt with anything like this, and the public is likely to be newly confused – same as people were confused by a virus that their grandparents understood very well.

When this problem developed a real persistence after the end of the gold standard in 1971, economists struggled to explain what was going on – and this goes for both the monetarist and Austrian schools.

Stop blaming business and start looking at monetary policy, they said in as many ways as they could. It took the better part of 10 years to get the message through. Finally, Paul Volcker in 1979 did what needed to be done. He shut and dialed back the printing presses, while Ronald Reagan defended the decision to undergo a bit of short-term pain for long-term gain.

Despite the enormous success, that was long ago. Nothing like this policy has been contemplated since then. The US regime has tried to print and spend itself out of every crisis since then, including and especially in 2008. The thought of allowing a natural economic correction to take place somehow became inconceivable – same as the thought of permitting the public to experience virus exposure while preserving freedom.

We are ruled by a class of people who imagine that nothing is outside the control of government and its wise managers. Not a virus, not the climate, and certainly not something as expected as a pricing response to profligate spending and printing.

The ruling class will likely follow China’s lead on inflation just as it did on China’s response to the virus. China has already imposed de facto price controls on its factories, warning against “gouging” and demanding that they ignore pricing signals.

“Beijing is moving swiftly to protect its factories and workplaces from rising costs,” writes the New York Times. “It has discouraged steel makers and coal producers from raising prices. It has vowed to investigate price-gouging and hoarding. And it has allowed its currency to rise in value to a level unseen in years, giving it a more valuable and powerful tool for buying up the world’s grain, meat, petroleum, minerals and other essentials.”

The US is nearly certain to copy China here. Once again.

To be sure, there are precise explanations for many of the price increases that do not call on monetary explanations. The housing issue is related to huge demographic upheavals with Americans moving here and there, spending some of the extra cash they saved during lockdowns. The problem with new, used, and rental cars traces to the microchip shortage. The problems with steel and lumber are related to broken supply chains. The labor issue is related to a supply problem too.

And yet, no rational person can shake off the possibility that there is a monetary element going on here that will come to affect every sector.

A highly politicized Fed is playing with fire. As Professor Warsh says, “it’s all about the time lag between the policy and its effects.” The Fed is making policy right now about the existing problems, not with an eye to what all this looks like in 18 months from now.

Politically, inflation is a disaster for the party in party, as Jimmy Carter discovered 40 years ago. Played right, the GOP could find itself surrounded by evidence of disaster as the mid-term election approaches.

The figure to keep an eye on here is velocity, very much delayed in reporting. It collapsed during the lockdowns. There is absolutely nothing the Fed can do to control this variable. It entirely depends on the decisions of dollar holdings. That in turn is heavily informed by public expectations, another variable the Fed cannot control.

Low velocity and public calm provides a tremendous amount of room for the Fed to expand money and credit without street-level effects simply because people are holding very large cash balances. That could change very fast. When it does change, it will likely be too late for the Fed to do anything, even if it had the tools to do so.

That’s when Biden’s Washignton will likely, once again, look to Beijing for guidance. And it seems the CCP has already shown its preferred path: threatening market actors not to act on the signals all around them.

Let us hope we do not have to wait 10 years — like last time — before smart people develop a more intelligent understanding of cause and effect in the monetary realm. There will be no fixing this problem until someone can show courage and take on the powers and policies of the Federal Reserve.

Protectionism and lockdownism have taken their toll...

How The Great Barrington Declaration Changed The World

A teachable moment for us all...

The Censors Finally Came for Me

There is nothing liberal remaining in liberalism...

The Good News From the Lockdown Tragedy

We can expect momentous changes...

What a way to top off a year-and-a-half-long collapse of public confidence in once-respected institutions! The Pulitzer Prize committee has given its award for “public service” to the New York Times...