The Daily Mail headline is that “experts” were “baffled” that coronadoom “cases,” by which they mean infections, fell by 50%, and that (in another headlines) they were “plummeting.“

The media is the enemy of the people.

Incidentally, it’s worth your time to enter “experts baffled covid” (or coronavirus) into search engines, focusing on news. Many headlines going back to last March. A lot of expert bafflement! But no shortage of confidence that quarantining the healthy and sick together, and that masking maskless-ness a federal crime are terrific ideas.

Anyway, regular readers will know that since early December (maybe before? I lost count) we have been making one of the easiest predictions that can be made: that deaths would peak in mid-January or so, and would then begin to fall. Because this happens every single year without exception and for the same reasons: voluntary lockdowns due to the cold weather.

We all start heading in late fall, the bugs circulate, and the bodies start piling up in December, with the peak, again, in early January. By the end of January, the most susceptible die off, and the rates go down.

Deaths of all kinds.

Meaning a guy who had a cardiac and keeled over after New Years died in fact of an MI. But that he also got a bad cold, or flu, or bronchitis, or whatever, pushed him over the edge.

Only this year, if the man got the doom, instead of putting a heart attack on the death certificate, they’d instead put the coronadoom.

But it can be mostly the weather. As it always is.

Speaking of cowardly experts, this: 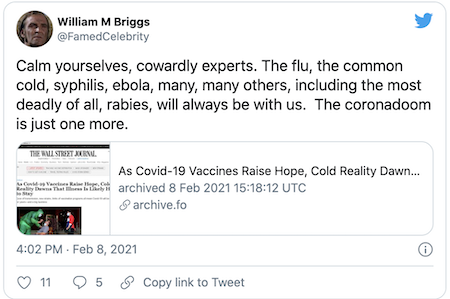 For when this tweet dies of coronavirus in seven days, it reads, “Calm yourselves, cowardly experts. The flu, the common cold, syphilis, ebola, many, many others, including the most deadly of all, rabies, will always be with us. The coronadoom is just one more” with a link to cowardly experts WSJ piece.

Why Simple Models Are Better Than Complex Models

In Finance, Climate, Coronadoom, and more...

The Best Years of Our Lives

I’ve been looking for futuristic Hollywood films to edify my readers...

Devolving into arguments from authority...

The great cry of the left is to “respect the science.”

The Revival of Chipmaking Royalty

An excerpt from the February issue…