Is FTX the Lehman of Our Time?

Look at the years of the implausible rise of FTX: 2019-2022. From $0 to $32B and back to $0. These were the years of stupid, as Fed credit pumped up an artificial prosperity in the midst of lockdowns and trillions were diverted from the dollar’s purchasing power to create such beasts as this. Its failure is but a sign of the times and could signal a much bigger unraveling.

To believe that the rise was the result of the genius of FTX founder and CEO Sam Bankman-Fried is to believe in magic. But many silly people in the venture capitalist realm went along with it. He mastered the caricature of the implausible wunderkind: the halting speech, the twitchy leg, the nasally intonation, the obscurantism.

To that Bankman-Fried added his own special sauce: woke ideology combined with political bribes. He used depositors’ money to become the second-largest donor to the Democratic Party, winning friends and influencing people especially for the midterms. Only days after the election, his scam fell apart when it was exposed by rivals in the industry.

SBF isn’t much of an idealist himself, but he mastered the art of pretending to be one. Every cliche from the woke lexicon tripped off his tongue. He would get rich not to consume but to give. He believed in ESG and DEI. He was striving to be carbon neutral to do his part to stop climate change. He was for animal rights and only ate vegan. He was all for pandemic planning, particularly his brother’s nonprofit that was set up to receive a substantial piece of the $30B that the Biden administration allocated to the effort.

Particularly interesting is the unusual relationship FTX had with the government of Ukraine. They were depositors with FTX. We all know where that money came from: US taxpayers, courtesy of the Biden administration. And then where did it go? Straight to fund elections in favor of blue. Seems like money laundering — and not of the hidden sort.

The whole company was founded only a week after Biden announced for president in 2019. SBF’s mother was co-founder of the political action committee called Mind the Gap. Maybe that was the whole point of FTX, to serve as a laundromat for dark money to stop the red wave. That’s not really a conspiracy theory. It’s just making sense of the facts we have.

A sign of what’s coming appeared in The New York Times just yesterday. Here you have an obvious con artist running a Ponzi scheme with money from workers, peasants, and taxpayers. Now most of it is gone. People all over the world face frozen accounts and lost funds. How do you write a puff piece about that? The NYT somehow managed to do it.

The company grew too fast, they explained, and not even the child genius could keep up with the miracles that he created. It’s all tragic, the reporter says, but hopefully the great man can get some rest after all the stress he has endured.

It’s quite a contrast with the way the media reported on Bernie Madoff and Elizabeth Holmes. But having the right political views and paying the right people can buy you affectionate media coverage, even now. So I don’t think we can expect much in the way of accountability. Sam Bankman-Fried managed to become too big to jail.

The lesson: stick with the reputable exchanges. Keep custody of your assets. If it is too good to be true, it is not true. These are the old principles, and they still apply today.

Everything Old Is New

We could look back at the spectacular crash of FTX as the beginning of a new era. Let us hope so. What began in 2008 and continued for the better part of 14 years appears finally to be coming to an end. The era of cheap money and credit is over.

This will affect all of business life and personal finances. It will dramatically change financial decisions and affect the culture. It’s going to amount to a return to good-sense, value investing, and companies that have to actually make a profit the old-fashioned way.

I’m not just talking about layoffs in Big Tech. Amazon is laying off 10,000 workers in management layers in the runup to the biggest shopping season of the year. They are watching business dry up.

Such cutbacks are occurring in every major company that reached gargantuan size. Twitter was just the beginning because soon after Facebook (sorry, Meta) announced the same, while many other companies that lived off ad revenue on the internet are experiencing the profitability squeeze as we headed into a solid recession (it will become obvious in months that we are already there).

It also affects real estate, the residential markets of which are already freezing up. And commercial real estate in big cities is similarly affected, particularly offices that are still only half-full. Lacking a buyers’ market, prices will have to come down relative to where they are today, though they are likely to remain inflated over valuations from 2019 due to persistent inflation that is only very gradually calming down.

The huge issue today concerns the rate of return on the safest place to park and move money, namely US debt. For nearly a decade and a half now, short-term interest rates have been negative. This is without precedent. It amounts to the loosest-possible monetary policy. By incentivizing capital to chase anything but safety, and discouraging savings in all forms, finance received a huge boost. But so did everything else, including crypto.

Looking back, it seems obvious that the craze for extreme risk, the who-cares attitude about the pace of business expansion, the magic-beans environment of digital tech, the claims that society has somehow managed to commoditize attention without committing resources, not to mention out-of-control government spending – all of this was propped up by zero-interest rate policies adopted after the last housing market crash.

The innovation perhaps seemed costless at the time. Ben Bernanke came up with the idea. Drive rates to zero to spare the financial system and macroeconomic environment but suppress the normal inflation that would follow through an accounting trick. The Fed would pay a higher-than-market rate to banks to keep their assets at the Fed, which would lock them away to keep them from creating inflationary pressure. For this great innovation, he was heralded as a genius.

What was the downside? For a while, it seemed like there was none. Savings did not fully collapse beyond their previous level simply because inflation was in check. And yet keeping money in Treasuries was no place for return. So money and capital went on a wild hunt for the whole of the 2010s, times when anything seemed possible both in finance and government. Rates were zero, homes were affordable, and credit was plentiful for everything and everyone.

Every kid could go to any college and rack up six figures of debt learning quasi-Marxist social theory, and porting that over to the workplace where high-flying fancy firms would employ them at high salaries to be clever on Slack and otherwise push woke philosophy. It was in this period that academia was flush with money and no longer had to worry about customers, so it began the great purge of conservative thinkers or anyone who disputed any aspect of the new religion.

So too it went in the corporate world, which came to dismiss old-fashioned concerns like serving customers and stockholders and instead pushed philanthropy and alignment with social and climate justice. It was this environment of infinite plenty that encouraged this simply because the possibilities seemed limitless and there seemed to be no cost at all.

It was precisely during this period of paper-fueled illusion that ESG and DEI were adopted by the best and brightest as central concerns in corporate life, and the experts at the World Economic Forum were on hand to pronounce that balancing the books is not nearly as important as signaling all the right virtues. Media backed up the craze at every step.

To appreciate how radical it was, we can adjust the federal funds rate by inflation and look back to the end of World War II and see. Rates very rarely went into negative territory except in the 1970s owing to high inflation. But once that problem was fixed, rates rewarded savers and kept economic rationality at the forefront from the 1980s to 1990s. These times were denounced as cowboy capitalism, but the truth is that savings were high and value investing was popular. The prosperity of those years was on a firmer footing than anything that followed.

After 2008, all bets were off. We plunged ever further into the abyss of negative rates. The Fed itself ballooned up a balance sheet as never before – effectively stuffing underperforming assets in every closet and filling up the basement too. 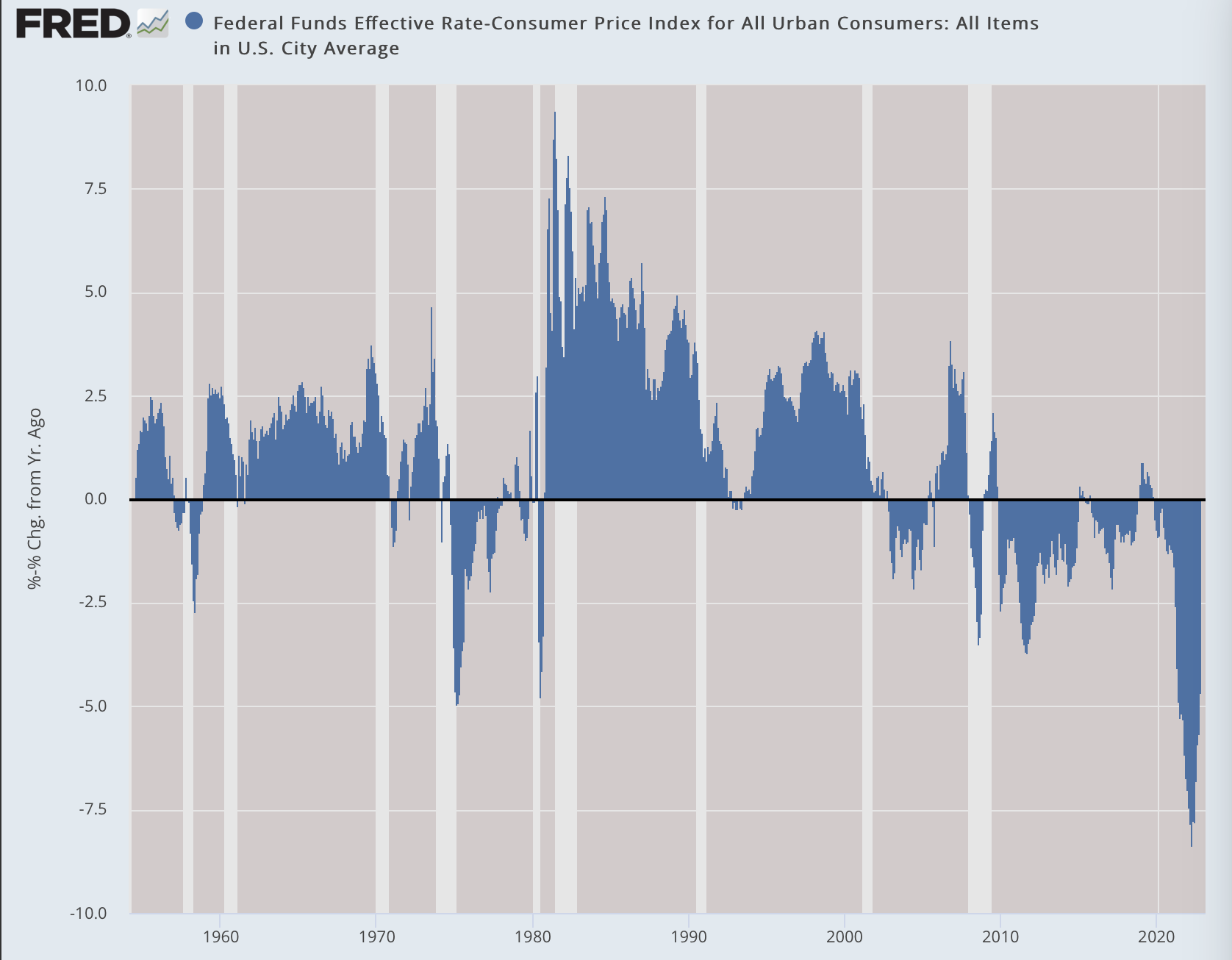 It was unsustainable, obviously, and the Fed planned an escape which began in 2019. It did not last thanks to the pandemic response, which called on the Fed to do the unthinkable. It went crazier than before. This time the destination of the new money was different. Instead of cold storage, the new money flooded the streets as hot money to spend right away.

After all these years, we now see the cost in intolerable levels of inflation. The Fed needs to put an end to it by driving up real rates above zero. That is going to require far more than what it has done so far. And to really repair the damage will require many years of restoration of balance sheets, a reshuffling of the workforce from fake to real jobs, and a return of sanity in financial markets and corporate culture.

Thus does the new era of tight money begin. I can’t think of a better poetic ending to the age of excess than the disgrace of the silly man Sam Bankman-Fried and his merry band of hucksters and druggies who bamboozled the whole of the ruling class into believing that they had some kind of Midas touch to mint money to fund all the causes the hard left sees as holy. FTX died a quick and fabulous death, and with it the dreams of a fully woke pool of infinite funding.

The transition from fantasy to reality is going to be extremely painful, not just financially but psychologically for a whole generation that imagined they could live a life untethered from all norms and rules of the past. The truth is that the dollar-based world has been living a 14-year lie. That truth is going to be a hard pill to swallow.

Let us end with a tip of the hat to economic forces. When the whole world is lying to us, we can still count on markets and balance sheets to reveal what is true.

What a world: loan defaults amid inflation and falling financials! No one is prepared for what this reality could mean for American life.

There is some reason that Sam-Bankman-Fried is already off the front pages. His only further use might be to join the regulators in the effort to create a CBDC.

Thrifting Your Way to Financial Security

Time prices show we have so much money compared to our needs that just a bit of thrift could make most of us financially secure.

The Cleansing Fire Is Here