Is this How It All Ends?

It’s been the most astonishing two weeks for American public life. The best way I can describe this is by observation. In the Northeast of the US, and in many other parts of the country, everywhere you go, right now, you see sick people milling around. They don’t admit it and they don’t talk about it with strangers simply because there is such shame attached to having Covid. But there it is.

After two years of work to control the spread, after brutal shutdowns of the whole country — shutdowns that happened two years too early, as judged by actual case trends! — Covid is here. Not just here. It is everywhere. The case counts are beyond anything anyone on the planet could have imagined a year or two ago. The spikes make everything that came before look like child’s play. 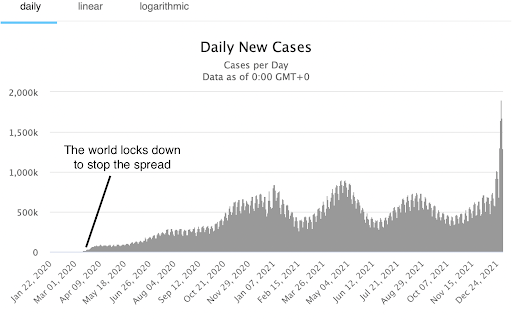 Sick Is Not Fun

And we are talking really sick. Not so much death. Not even out-of-control hospitalization. We are talking about being sick in bed or walking around with misery. The damn bug lasts maybe two days, maybe two weeks, maybe longer but it is vexing and wicked, not like a cold or flu but something more electric and strange.

The theory that this was a lab leak seems more plausible than ever, just simply based on how strange it all feels.

Which variant? Two weeks ago, CDC wanted to blame it all on Omicron. That is no longer possible. Perhaps that constitutes 20%; we just do not know for sure. Most of it is evidentially Delta, meaning very sick but with no serious loss of taste and smell. Most everyone eventually gets well, and that’s what happens here.

We get to endemicity perhaps in a month or so and life will move on. What’s striking and truly shocking is that all of the efforts, all of the propaganda, all of the astonishing spending and compulsion — the shutdowns, masking, size limits, travel restrictions, vaccination requirements, the track and trace, the endless testing — and what do we have to show for it?

The true pandemic finally arrived. And what is it? It is a ton of sick people. People are calling in sick because they cannot come to work. Institutions are having to shut down, not because government closed them, but because people are too sick to come to work.

And it’s not just Covid. The head of an Indiana life insurance company reports that deaths among people aged 18-64 are up 40%, an astonishing increase. It’s suicide, drug overdoses, and every other manner of horror. And that’s just death. Many others are just sick from other things.

I personally know dozens and they each know many dozens of more people in the Northeast right now who are down for the count, miserable and pathetic, but still testing negative for Covid. Why would this be? It’s because immune systems have been miserably decayed over two years. The lack of vitamin D, the lack of exposure to normal germs in life, the isolation and depression, the overconsumption of liquor and drugs — it's all been a terrible drain on health.

Meanwhile, the actual pandemic of Covid has certainly arrived. And it is far worse than the data indicated. Look at Massachusetts, New York, Pennsylvania, Rhode Island, Connecticut, any of these states, and including some Southern and midwestern states, and what you find is increases of 500-1000% in cases. And keep in mind that these are just cases as discovered by official testing spots.

Go to any CVS or Walgreens and you find long lines of people buying testing kits. If they are available. If they are not, the wait is weeks. They are $23 a kit and people are buying as many as possible. Why? Partially it’s because employers and schools are demanding negative tests, but it is also just curiosity. People are sick as dogs and want to confirm their illnesses.

People are estimating that real cases are 50x to 100x what the official data say.

But let’s talk now about a real scandal. When you are sick, you need treatment. Every competent medical professional I know is pretty darn sure that the best hope for dealing with Covid is a combination of Zinc, Vitamin D, and Ivermectin. This is not ideological. This is what experienced doctors are saying right now. I’m on many email lists with serious medical professionals and they are all saying the same thing. We can add HCQ to the list if you catch it early enough.

But here’s the kicker — and let me be clear that I’m NOT giving ANY medical advice here, merely just reporting the sense of the community out there. What’s remarkable is that people are having a very difficult time getting these basic therapeutics.

Where are the Meds?

There is a problem getting a prescription because state medical boards are actually barring people and preventing them from serving patients if they prescribe HCQ or Ivermectin, as incredible as that sounds. But once you get the prescription — if you have a doctor brave enough to risk it — finding a pharmacy to fill it is another challenge.

Most people in the UK today are getting their therapeutics from India! And some are shipping to the US and they are being distributed via gray markets for anyone who is lucky enough to have a contact. It’s a speakeasy nation, but this time for distributing basic therapies.

I’m sorry, I feel like I’ve seen horrible things for two years now, and you feel the same way. But of all the scandals, and there are so many, this one seems to top the list, namely that once the real pandemic has arrived, there are no effective medicines that are widely available. Doctors are actually being blocked from doing their jobs!

Beyond belief. But you know this. I’m sure you have your own stories. I suspect that many of our readers have encountered this virus for the first time in the last two weeks and have dealt with the horrors of just getting basic medicines to get through this.

The NIS has funded almost no serious trials of these generic drugs. It is not in the interest of pharmaceutical companies to fund them either. As a result, we are truly at a loss — two years into a pandemic at a time when people need meds more than ever.

Meanwhile, the FTC is spending its time cracking down on pharmacies that advertise that they have therapeutics available for people. They are sending cease and desist letters all over the country as a way of intimidating providers. Again, it’s simply incredible.

One merciful upside to all of this is that there is no more talk of lockdowns. That’s not even being considered. The whole country is fed up with the phoney baloney enterprise of virus control. It did not and cannot work. And the truth of this is all over the data that anyone can see and the stories that anyone can hear. The country is right now sicker than it has ever been in our lifetimes.

What a stunning repudiation of state policy — the worst failing of public health and public policy perhaps in the history of the US, if not the entire world. We are right now living in its last days. Remember these days, my friends. They are legion and mark what is likely the end of the great fiasco.

There will be decades of hell to pay for what has happened to us.

This is the single worst example of state planning in my lifetime.

None of what has happened to us was necessary. It’s been a complete disaster. And now the disaster is something we are stuck with for the duration.

You are Being Groomed for Price Controls

These people are economic ignoramuses plus they have been infected by massive power lust.

What they tell you is the news is not the news.

The Top Prophecy of the Week

To Them, You Are a Machine to Be Managed

We live in extremely spooky times.

The Pillaging of American Workers

Our liberties are draining away fast, and the rise of inflation is only one symptom of many.