Millions on the Move, Blowing Up Housing Prices

I was hanging out at a U-Haul office the other day, grabbing a small truck for some stuff I needed to get from here to there. I took a few moments to talk to the staff about their workload. My goodness did they give me an earful!

It’s been wild for a year, from opening to closing, people renting trucks for short and long trips, big and small ones, throwing money around like crazy, almost panic-like, going from one place to another. The pace of business at this place, they said, gets more intense by the day. They have more work than ever, and it’s ever more difficult to get people to come to work.

U-Haul’s 2020 data from millions of moves showed a distinct trend. Down with California. Down with Illinois. Down with urban centers like New York City and San Francisco. Up with Texas, Florida, Tennessee, Georgia, North and South Carolina, and suburban areas outside of large cities. The 2021 report will surely show the same, documenting the largest demographic upheaval in probably a century.

Get the Heck Outta Dodge

Why all the moves? There are a number of factors. Press reports typically highlight that many people figured out that they could work from home, and so preferred a more comfy home to the place they used to think of as a crash pad between commutes and office life. There’s truth in that. But there was also an escape motive: get away from lockdowns back to normal life. And get away from crime to a place of tranquility and safety.

From talking to many other movers, I’ve also discerned a more opaque motivation, just a sense of wanting to flee one life for another. This is why so many people are changing jobs: more than half of workers say they are looking for a new position. This is particularly true among higher-income groups. They are leaving industries vulnerable to lockdowns for positions that are more stable, flexible in the work environment, and with more upward mobility.

This whole trend has shocked previously sleepy communities. I’ve always thought of my mother’s town in Texas as a sleepy place for people without high life aspirations (maybe all kids think of their parents’ homes this way). No longer the case, if it ever was. It has become this destination for people from New York, Oregon, California, and all over, with more immigration coming than in generations. Home prices are up 20%. Hotels are popping up everywhere. You can’t get dinner out without a reservation. (I’m only allowed to tell you this, Mom said, if I didn’t give the name of the town; she is fed up with the traffic!)

There is stiff competition for what will be the most lasting impact of policies of the past 18 months. Will it be hyperinflation? A wild boom followed by a bust in financials? A permanent welfare state for the middle class? Maybe it will be all of these, but this one trend is absolutely indisputable. Millions of Americans have torn up their roots where they once moved and landed somewhere else.

Remember how in 2009, everyone felt profound regret for the housing bubble that had just exploded? Everyone also claimed to have predicted it (although few in fact did). There was a sense in those days that everyone knew that it was an unsustainable boom created by loose credit and sloppy lending standards. It had to come to an end.

Interesting. Today, you hear exactly what you heard in 2007: stop worrying about the housing boom! This is just supply and demand at work. And to be fair, there is a stronger case for saying that now than there was in 2007. People really are bailing from big urban centers, where the house-price increase is far less pronounced, to put their money in other places that were arguably undervalued.

But look at the effect on housing prices in general, expressed in change from one year ago. According to the Case-Shiller index, home prices in America's 20 largest cities have exploded at 19.08% year over year in June, up from 17.14% in May, which is the fastest pace in 30 years. Looked at in dollar terms, this boom does not have a precedent. 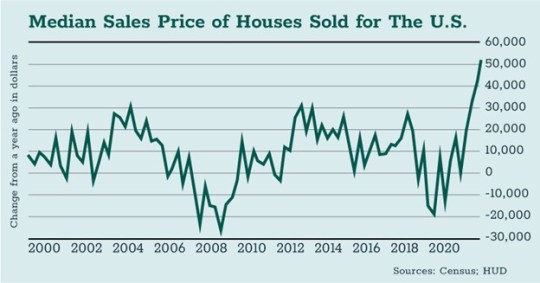 Even more interesting is the effect on home rentals. People typically go about their decision-making in an order of priority. They first decide on a place in which they aspire to live. Then they look for a job there or at least something that is consistent with the aspiration. Then they decide on a neighborhood, perhaps determined by the school district. Then they head to Zillow to check it out. That’s when the shock takes place. The competition is also extremely tight. A bidding war can cause house prices to soar 10% to 30% more than the sticker price.

Ruling out a house purchase, the next step is logical: rent a home. Here the problems only increase. Year to date, home rentals are up 13%, and this number is low given how hard it is in fact to increase rental rates on existing tenants. The time when it is possible to impose a market-clearing price is when people move out and others move in. So, in most cases, the move-in rate of increase is much higher.

Large corporate buys of homes designed to be flipped into rental properties are rocking the financial markets. Two companies – Invitation Homes (INVH) and American Homes 4 Rent (AMH) – are up 38% for the year. In addition, one in five purchases of homes this year have been corporate, with the intention of turning them into rents. Goldman Sachs, Blackstone, and Investco have committed some $11 billion to the cause. And there is more money pouring into building new properties designed as rentals. All credit to the wisdom of markets here: they are capable of ferreting out profits from sectors even in the midst of upheaval.

The same trend is affecting apartment units too: 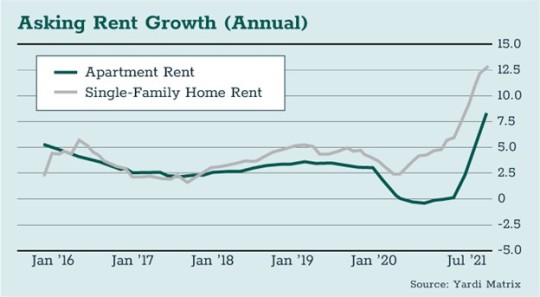 A huge complication for rental markets over the past year has been the CDC moratorium on evictions. This has put landlords in a very awkward position. Renters don’t have to pay if they don’t want to. Sure, failing to do so will hurt the credit rating but irresponsible renters do not care. With the moratorium, there is nothing that the landlord can do to get rid of them. According to the CDC’s edict, the renter is not exempt from paying as such, but without the ability for owners to enforce that, markets break down.

As a result, the only way that landlords have to make sure that they will get their money is to discriminate toward low-risk tenants with high credit ratings, a good income stream, and a job that suggests responsibility and human decency. That leaves out marginal renters and people who job hop. Where do they go? That much is unclear. The housing shortage today might in fact turn into a growing homeless problem tomorrow.

Another factor that we cannot entirely discount here: the whole country is awash in newly printed money, with some of it stuffed into people’s bank accounts directly from the US Treasury, a policy as close to a helicopter drop as one can get. Powell says it is not inflation because it is not affecting every sector, but this is how real-world inflation works: it hits the sectors where people are spending money first. In this case, it is hitting financials and housing.

How Real? How Fake?

Again, every bit of this chaos has been caused by egregious policy decisions over the last year. It’s been one terrible decision after another: lockdowns, rampant criminality, government debts, government spending, inflation, eviction moratorium, and now you have vaccine mandates further driving people out of large cities into suburban areas where life feels quasi-normal.

Nor is this anywhere near the end of the surprising implications of what has happened to this country in such a brief period of time. It’s one sign of many signs, with so many more surprises coming around the corner.

It seems like we are moving from disaster to disaster. If it turns out that the vaccines are nothing like what they were cracked up to be, and even prove to be dangerous, there will be no going back.

Is the Revolution Almost Here?

What we see in Australia today might be a look into our own future. States all over the world have overreached.

Prepare for a Very Cold Winter

If you are looking to make money off the coming natural gas shortage, have a look at energy stocks.

The Intentional Destruction of New York

We find ourselves in an emergency situation. The world is tottering between two visions of human life.

Facebook has been fundamentally transmogrified into a PR agency for the state.

My advice is to turn off the television and stop looking at those notifications from mainstream sources on your phone.

The great struggle here is not only economic, not only cultural and social; it is fundamentally psychological.