The Coming Triumph of Brick-and-Mortar Retail

The other day one of our smartest — and richest — friends told us his number one current favorite investment prospect is… shopping malls.

Crazy, right? Look what’s been happening in that sector. Check out this 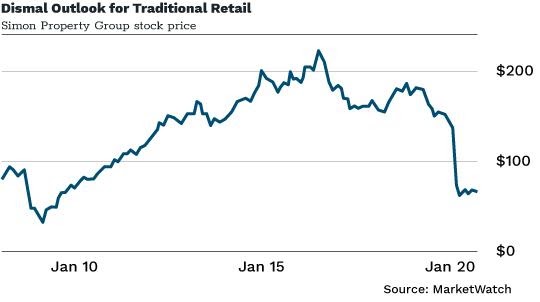 Yes, the precipitous drops over the past 12 years were event driven (the Panic of 2008 and Covidamania). But it’s competition from online retail that has kept the malls from bouncing back. And the biggest mall-killer of them all has been Amazon.

Clearly, Mr. Market believes that the American mall, like the Roman Coliseum after the barbarians rolled into town, is headed for a rock quarry future.

We don’t believe it.

We’ve been taking a deep dive into the online retail space over the past few weeks while we’re researching the next opportunity for The George Gilder Report, where we are George’s analysts and co-authors.

And oddly enough, our optimism about the future of brick-and-mortar comes from… Amazon.

Indeed, based on our research, we think the big news in retail in the coming decade will be a great brick-and-mortar comeback. And while it might sound strange, the comeback will be supported by Amazon itself — a company that paid a nice chunk of change - $9 billion - for Whole Foods Market not too long ago.

Amazon’s Game of Chicken is About to End

Think about how Amazon has done so much damage to onsite sellers over the past decade. It really comes down to one issue: margin pressure.

Over the years, the most common recurring criticism of Amazon has been that its operating margins on retail sales were frighteningly low, stuck around 2%, or lower.

To which Jeff Bezos always had a good answer: Margins didn’t matter because Amazon turned over inventory so fast that no onsite retailer could compete. Who cares if margins are 2% if you are selling two, three, four times as fast as its brick-and-mortar competitors?

Mainstream retail — the resale of relatively common items and recognizable brands — is basically a game of chicken. Whether you are selling onsite or online, you compete by cutting prices and compressing your own margins more than your competitors can afford to compress theirs.

That’s what Amazon did, with much of its price cutting coming in shipping and logistics costs it did not pass on to consumers. That approach drove lots of competitors, including mall anchors like Sears and J C Penney, onto the trash heap of history.

But we think that process has just about run its course.

For two reasons, each represented by action in the two big segments comprising Amazon’s retail business.

The first segment is Amazon direct sales, wherein Amazon funds, acquires and warehouses its own inventory, then sells and ships it to consumers via UPS, drone, carrier pigeon, native bearer, or whomever.

This is the Amazon segment that’s been slaughtering brick-and-mortar retail. It’s easy to see why, considering Amazon is selling the same products as Walmart, or Target, or Macy’s, or Home Depot at prices that have its onsite competitors contemplating the abyss.

Yes, Amazon has valiantly attempted to lower its own costs of logistics and shipping. But Amazon’s operating margins on its own retail sales appear never to have gotten much above 2%. There is some guesswork here because of how Amazon consolidates its financials. Still, we think 2% is a reasonable, even generous estimate.

Bottom line: We think 2% is about as close to zero as the firm can risk.

Reason #2: The Marketplace Boom — and Boon

Amazon Marketplace is the segment in which third party sellers pay Amazon to use its sales platform, and even its warehousing and shipping systems to sell their own wears. And Marketplace has been on a tear. Once an afterthought, the Marketplace business is far more profitable per dollar of revenue than direct sales, and it now supplies more of Amazon’s bottom line.

How does that lead to growth for brick-and-mortar?

First marketplace is less of a threat to mainstream retail — onsite or online — because most items sold on Marketplace aren’t really mainstream: they are “long-tail” or at best “medium-tail” products that sell in relatively low volume. You won’t find many of these items in your local Walmart

To the contrary lots of the strongest Marketplace merchants are small-to-midsize boutiques that sell both onsite as well as online.

To put it another way, Amazon now makes most of its money helping those small to medium stores increase their revenues.

Yes, in theory Amazon could use its profits from Marketplace to do even more price cutting on its direct sales side. But it won’t.

Smart companies try not to compete with their customers. And going by his annual letter to shareholders, Jeff Bezos finally has realized that his best customers are not consumers but fellow merchants.

Bottom line: As the Marketplace revenue continues to grow — and Amazon’s margin pressure levels off —hybrid online/onsite merchants may not be quite ready to surrender all that retail real estate to the rock quarries just yet.

More anchor stores may die, and malls may get even more boutique-ish (like online retail itself) but they aren’t going away.

Does that mean it’s time to invest in brick-and-mortar retail like our wealthy friend suggests?

Well, like we said our friend is both rich — which means he can take a lot of heat — and smart so he is probably doing stuff we would never try, like hedging debt against equity. That way he can make money even if a company like Simon heads into bankruptcy.

Personally, our policy is watchful waiting, with the emphasis on watchful.

Today’s Prophecy: Five years from now it will be hard to remember we all once believed malls were dead.

See you at the mall.

Who would have thought…

Fear And The Need To Feel Safe: A Coronadoom Tale

The Miracle that is Taiwan

In an extraordinarily dense population, this country was nearly impervious to COVID-19.