How pathetic that daily the Biden administration dares defend the current economic environment! It’s why these times more and more remind us all of some dystopian novel. They lie to us daily, like an unending exercise in gaslighting. And how degrading for the human beings who are paid to stand in front of microphones to utter such inanities! It’s truly below human dignity.

Just as inflation rates seem to improve in one area (gasoline, for example), it pops up in other areas. Food prices are on the move again. So it may cost a few cents less to get to the grocery store, you will spend more this week than last in doing so.

Substituting fancy products for cheaper ones only gets you so far. Meanwhile, one sector above all else now seems to be absorbing new inflationary energy: your utility bills. Have a look and compare it to last month and you will see what I mean.

This is how inflation works. It is not one rate. There is no index in the real world. There are only price pressures that migrate from sector to sector, place to place, and in ways that no one can predict.

In Texas, over the weekend, I found a brisket for sale for $18 per pound that only last year cost $5 per pound. It’s from a local ranch, meaning that the rancher had to pay high fertilizer costs and more. This new price is not robbery: it’s cost covering.

Of course, inflation affects real income. Right now, it’s falling faster and for longer than at any time on record. No living person has ever been hit this hard. That includes people who lived through the Great Depression. At least back then, the dollars you held were growing in value. Today they are declining in value. And to top it off, this crash in living standards happened just following the biggest financial head fake in history during which time we believed we were rich one day and suddenly we were poor the next.

What a remarkable and speedy shift! 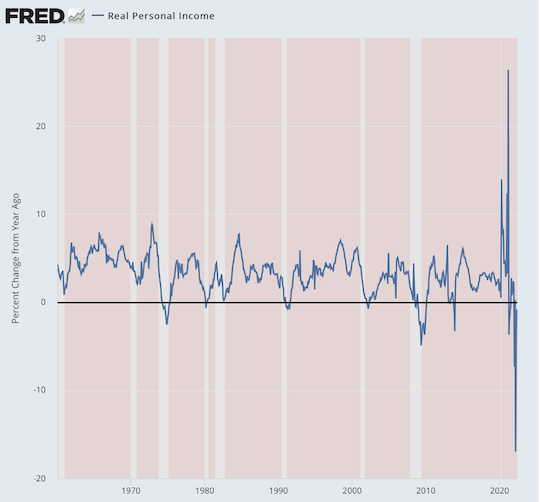 But, hey, at least we have credit cards! Credit card debt is up by 13% in the second quarter, which is the largest increase in 20 years. And people are paying for it too: rates for floating balances month to month are running 16-17% thanks to the Fed’s new interest rate policies that will not tamp down inflation anytime soon but are absolutely killing the bond market and guaranteeing the recession that the government denies exists.

If people look up recession on Wikipedia, they can confirm that no such thing exists for one simple reason: the government says it is not happening. Just like the famine in Ukraine in the 1930s. What is unreported is not existent.

How Long Can This Go On?

Take a careful look at this chart that compares the purchasing power of the dollar to increases in M2, which is the only money aggregate we have left that offers some modicum of credibility. 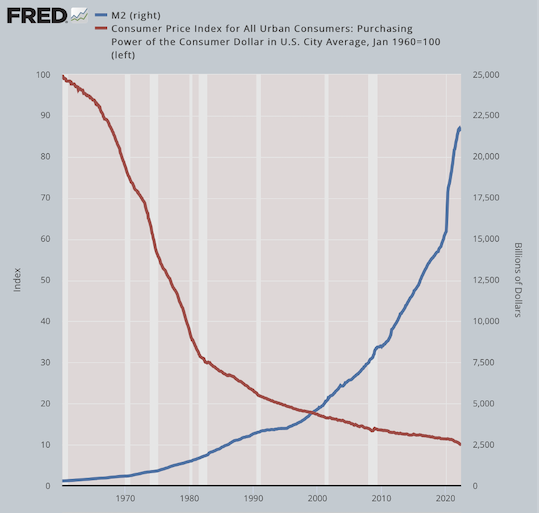 I’m not a betting man but there is every reason to expect that red line to fall and fall, at least to keep in line with the increase in producer prices, which are running at an incredible 20% per annum rate of increase right now.

The first great mega-disaster could be in our old friend housing. Demand is falling dramatically. The house-flipping party has ended. You cannot sell even at a massively inflated price because you will be dumping a 2% 3-year loan for a new loan of 6%. The housing roulette of 2020-21 worked so long as interest rates made the racket financially viable but that is no longer the case.

The result snuck up slowly and then all at once. 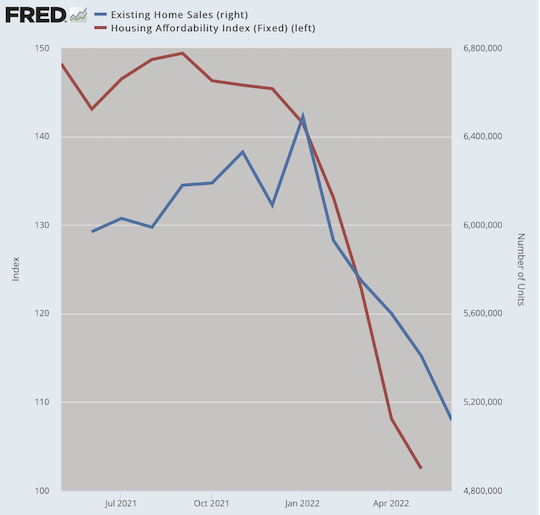 Forget renting too. Rental vacancy rates are down to the lowest levels in forty years, even as the price of rents themselves are close to being on par with the CPI generally. The pace of change here is also worth a heads up. It’s going to get worse. 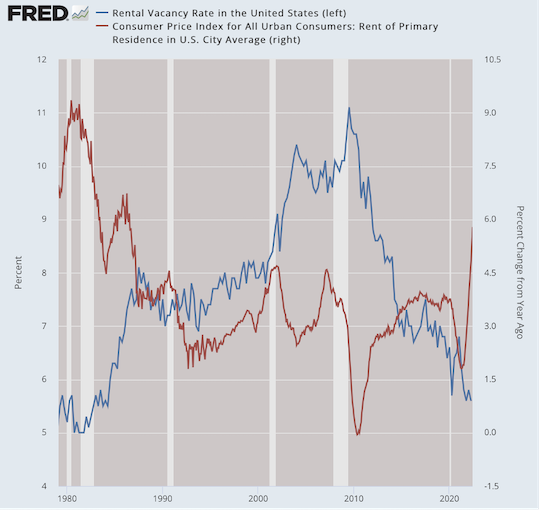 After the grim realities of the housing market sink in, there will be more bad news in labor markets. We are just seeing the first signs. The only way to understand this sector is by decoupling professional and working-class jobs. There will be no shortages of opportunities to drive trucks, tend bars, fix cars, and install solar panels. But high-end managerial positions, particularly in financial companies are another matter. No longer will a college degree count for much in this labor crunch.

Already the signs are there, with Robinhood cutting one in four positions as the day-trading craze of the lockdown years has evaporated. Google, Facebook, and Amazon are already making noise about culling management-level positions. The overall market will show continuing labor shortages and people who expect six figures for doing next-to-nothing will find themselves sorely disappointed.

One might suppose there would be panic at the highest levels. I’m not seeing the evidence. Instead, we have a U.S. Congress — probably the most criminally minded majority in at least a century — throwing wild amounts of money around to special interests without a care in the world. Looking back at it, the rigged election of 2020, in which Trump’s defeat also put control of the House and Senate in the Democrat’s hands, created a political calamity without precedent that is still ongoing.

They figure that they have two more months of this nonsense and intend to pillage as much as they can while they can.

Nor is the major news media making much of a fuss about the end of American prosperity. Today’s New York Times features a top article explaining how you can avoid Covid by limiting the number of people you have at your home barbecue, making sure that all guests are fully vaccinated and boosted, and that everyone has recently tested negative. Sounds like a real party!

And yes, this article was written just yesterday, not in 2020.

For years now, we kept thinking things would get better, that someone would save us from the emerging hell. That is not happening.