The Emergence of the Large Cap Paradigm [Part 3]

As I have previously stated, my analysts Richard Vigilante and Steve Waite have written this four-part series for readers of Gilder’s Daily Prophecy.

If you missed the intro I gave on my stellar team, go here to catch up.

We’ve been discussing what we call the large cap paradigm — the advantage just at the current moment accruing to large, veteran firms in core Cosm technologies, especially semiconductor fabrication, and optical and wireless communications.

In the last installment, we discussed the progressive and increasing dominance of a handful of semiconductor foundries, most conspicuously Taiwan Semiconductor (TSMC). These increasingly stand alone in their ability to manufacture the most demanding, high-density microchips in geometries. Shrinking from 7 nm, to 5nm, next year to 3nm, and eventually — later this decade — to 2 nm. The Microcosm has morphed into the Nanocosm right before our quantum eyes.

We observed that the number of foundries able to manufacture at industry-leading standards has shrunk from about 30 two decades ago, to six a decade ago, to three today, going down to two and perhaps even one within the next few years.

Among semiconductor foundries, “large” really is the operative distinction: It is the learning curve, the observed 20-30% reduction in cost per doubling of accumulated volume that has enabled TSMC and just a few other rivals to break away from the pack.

In optical communications we see a similar phenomenon. As state-of-the art transmission speeds over a single lambda have risen from 10 Gigabits per second, to 40, 100, 200, 400, and now 800 gigs, the number of viable competitors has fallen away rather dramatically. (See graph below.)

Today, only three companies (Infinera, Ciena, and Huawei) are capable of building optical machines that can transmit and receive at 800 Gbps. And Huawei is focusing on relatively short distances. Infinera, the leader, has demonstrated 800 Gbps over 700 km.

The two US companies, Ciena and Infinera, are both much smaller than TSMC. With a market cap under $2 billion INFN is technically not even a large cap firm. (The third player, Huwaei, a much larger and more diversified Chinese firm, is privately held.)

The difference however is less than it seems. The total “optical engine” market is much smaller than the total market for semiconductor fabrication, accounting for CIEN and INFN’s relatively small size. Within that market, however, Ciena and Infinera, have a technology lead over their piers that would very difficult to surmount, even by competitors determined to do so.

As we have seen, however, the competitors — far from determined — have dropped out of the race.

Leader of the Pack

The reason for this is not any slackening demand in the market. We all know that total demand for bandwidth has been increasing exponentially since the dawn of the internet era (see the graph below). Beneath that rather generous curve, a number of optical transport component makers still thrive operating at more humble levels than the leaders. Addressing a viable market for systems operating at much lower than state of the art levels. (The same applies in the semiconductor world where there are dozens of manufacturers still operating at second and third tier levels.) 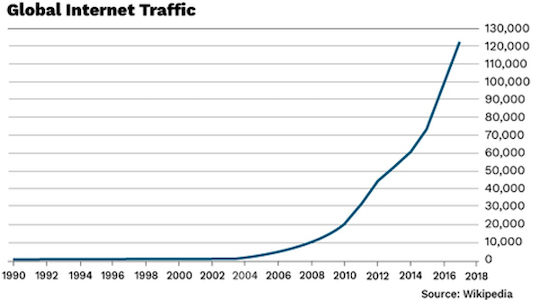 As with demand for extreme integrated circuit densities, to know which technologies will prevail we need to know not total demand but demand at a single instant in time and a single point in space: how many gigabits we can send or receive right at this instant right at this node.

The great optical engine makers, year after year, have been straining every muscle to reach first 100 Gbps, then 200, then 400, and now 800 not merely to show off, but because those peak speeds have become imperative to network function. Even if most of the time most nodes operate at much slower speeds.

This is for two reasons, one long-standing and one rather new:

AI is a statistical phenomenon; more iterations, faster, are the key to machine learning success. There are points of diminishing returns but these recede with the growing power and complexity of the algorithms. The marginal advantages of processing a billion bits of data per second quickly become the absolute imperative of processing a hundred billion.

In an AI world, more than ever the measure of a network is not total capacity, but a capacity at a single instant of time and at a single point in space.

How Ciena and Infinera triumphed is too complicated a story to re-tell here. Head over to our website to catch the full story.

However, the short version goes back once again to Clay Christensen and his “sustaining innovation” paradigm.

Leave it to Clay Christensen

When a technology, however powerful, still does not meet the maximum needs of the most demanding customers…sustaining innovation, continuous improvement, is required.

Sustaining innovation, in turn, is typically achieved by very intimate integration of the design and manufacturing process, with every step tweaked and optimized for maximum performance.

Interviewing the top technologists at both Ciena and Infinera, we kept looking for the one big secret. The one big move they had made to secure victory. Again and again, they told us there was no such thing.

Yet at both firms, we were told that neither “silicon” for “indium phosphide” alone were the answer.

There were five crucial points of leverage, or six, or four, but never just one. A competitor that wanted to steal their thunder would not only have to get every point of leverage right, but each decision would have to be the right one given multiple prior decision.

Though neither company is a megalith on the order of TSMC, both have created very high barriers. The cost of trying to duplicate their efforts measured against the very real risk of failure would intimidate most rivals.

Adding total capacity to a network is a thing that can always be done, at some price. But there is never any guarantee that we can increase capacity at single instant in time and or point in space. It was not foreordained that optical engines would someday send 200, 400, or 800 Gbps across a single lambda. It is not foreordained that we will reach 1,600, or even 1,000.

It might just be too hard. But even if can be done, only a handful of extraordinary companies have a shot at the winners’ circle. Those are the companies we want to invest in and hold, and double up on when Mr. Market gives us the opportunity.

CIEN, INFN, and Huawei will continue to dominate the market for the highest-end optical transceivers against shrinking competition.

Tomorrow: Qualcomm’s fountain of youth and the disruptive technology on the horizon.

The Emergence of the Large Cap Paradigm [Part 4]

Who would have thought…

Fear And The Need To Feel Safe: A Coronadoom Tale

The Miracle that is Taiwan

In an extraordinarily dense population, this country was nearly impervious to COVID-19.