Let’s understand the significance of the Bank of England’s recent announcement that it would start buying $65 billion in UK public debt. It represents an about-face on the previous policy of using central bank power to sop up excess liquidity in hopes of getting inflation under control. It’s like crossing a river halfway and then turning back in the other direction.

What exactly was the Bank of England seeing that caused this about-face? It was getting wild calls from pension-fund managers all over the country that the systems were about to collapse. They were demanding that the BoE reverse course in its war on inflation and stop raising rates. Incredibly, the central bank immediately gave in.

The Bank was immediately celebrated by the mainstream financial media: “The Bank of England's emergency bond purchases may have prevented a huge number of UK pension funds from collapsing,” they all said.

All hail the central bank! It saved the day again!

Observers have said that the entire freakout was actually a fake-out. Nothing truly terrible was happening. The Bank was sold a bill of goods. David Stockman observes: “there was no market malfunction. The bolded claims are just this cycle’s version of the alleged seizure of markets during the Lehman collapse in September 2008. Then and now self-interested financial operators create instant urban legends to justify massive central bank and fiscal bailouts that are wholly unwarranted in the short-term and financially poisonous in the longer-term.”

What is crucial here is what it portends for the rest of the world. A major central bank has shown its willingness to reverse course in the face of the slightest provocation from leading market players. They have shown the policy is highly contingent. If there are real storms or perceptions of storms, they are ready to open up the monetary spigots once again and bail out any major market players, even if that results in inflation.

In other words, the war on inflation might be a determined policy goal. But the term “policy” is ultimately an abstraction. It is what central banks desire under the best conditions. But waging a war on inflation also has an industrial cost, especially to the bond markets and major pools of wealth that rely on them. The bond market is the wheel that squeaks and there are going to be market conditions that cause central banks to pull out the barrel of oil.

If we have learned anything over the last three years it is that central bank actions are highly correlated and coordinated throughout the world. The U.S., the UK, and the EU are attempting to do the same thing together at the same time. Part of the goal here is to avoid singular culpability for errors. If there is a major disaster — and there has been — any one region can always point to the other and say that they did it too.

The Bank of England’s response here is a major departure from policies in the U.S. and EU. There is simply no way that the Bank did this without consultation with the Fed. It is also likely that the Fed gave them the green light to go ahead. Hey, a war on inflation is fine and great but you simply cannot allow public-sector pensions to go belly up. What’s a central bank for anyway? It cannot be said enough: the whole purpose of a central bank is to serve elite financial interests. That’s it. The rest of the mandate is a luxury they will exercise in normal times but quickly throw out during a crisis. The UK intervention in the bond market is proof of this.

Can it happen in the U.S.? Certainly. The Fed has been warning loudly and aggressively about a tightening for many months now and has taken some efforts in that direction. Even its minor efforts have resulted in a freefall in the housing market as interest rates on 30-year mortgages have risen faster than ever before. The number of homes sold has crashed by 26% from January to August 2022.

That trend has already made the Fed squeamish but not enough yet to reverse course. But here’s the real problem. There is vast inflationary pressure still alive in the system. We have a long way to go before the $6.3 trillion in phony money from 2020-21 is absorbed into the market. The only way the Fed can really get inflation under control — forget going back to 2019 prices! — is to raise the federal funds rate above the inflation rate.

Let’s see how they are doing. If the Fed really wants to outrun inflation with its interest rate policies, it has a very long way to go. This policy offers nothing like the bracing cold water of the Volcker years. 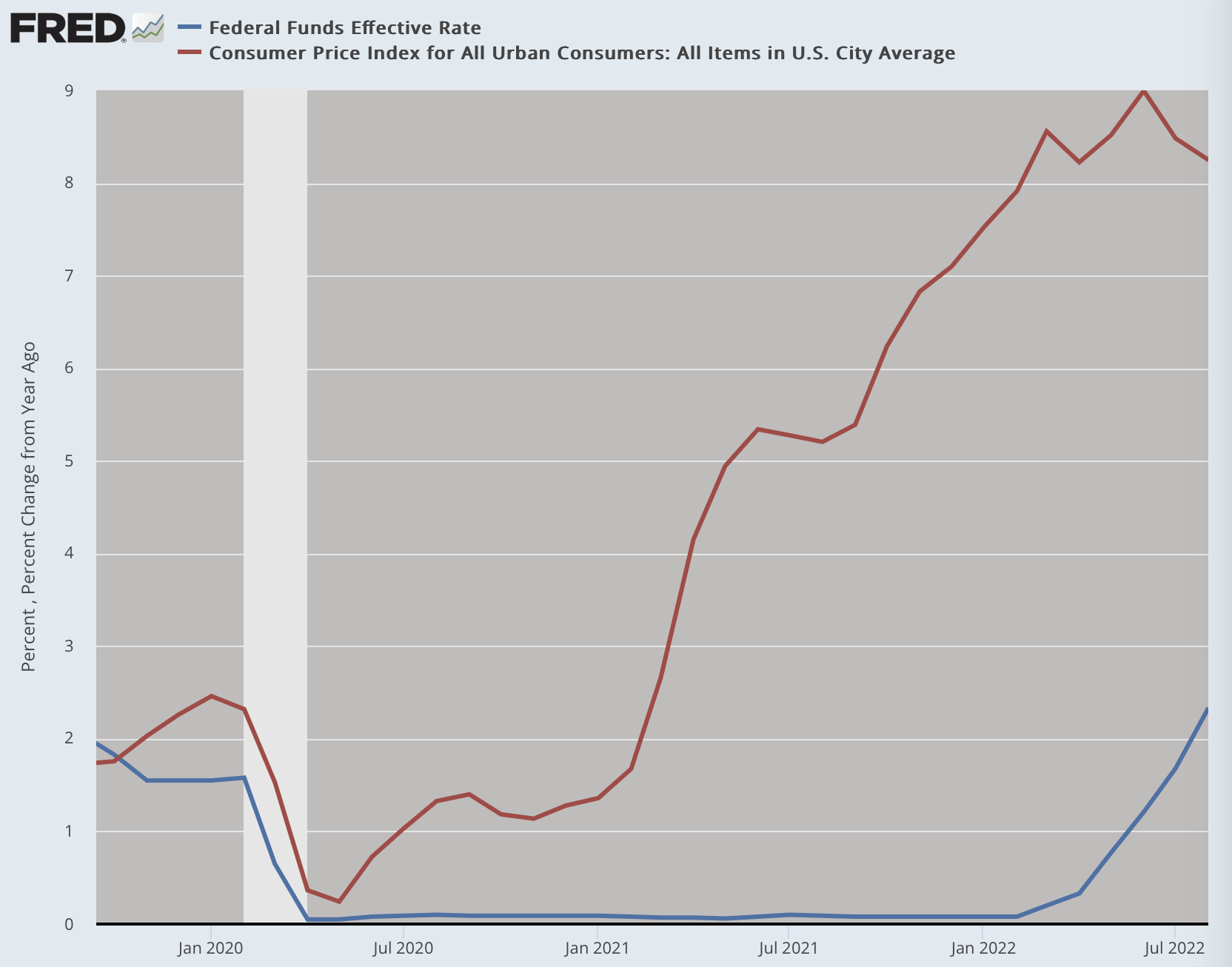 Words Are Worth the Paper They Print

Too often, reporters take the pronouncements of the Fed at face value without considering the possibility that they might be designed to manipulate. The Fed has a very strong interest now in reducing inflationary expectations for fear of triggering an increase in velocity and flight from paper.

They know for certain that there is a real danger of triggering much higher inflation and believe that a calming of the public and financial markets can mitigate such a result. This is the reason for why the jawboning has so far outstripped the reality.

But in the end, there is nothing that a press release can do to paper over reality itself. Again, policy is an abstraction whereas market chaos (real or perceived) is what the Fed must deal with every day.

The Fed has not the moral wherewithal to push its war on inflation as far as it must go to tame this beast. Something will be the trigger. Something will happen, likely between now and the end of the year, to cause the Fed to reverse course.

The powerful elites in Washington are far more willing to tolerate a massive currency depreciation before they allow pension funds to go belly up. Plus the decline in the value of the dollar provides a great pretext for the next great monetary reform about which we wrote two days ago. They want to blockchain and digitize the dollar in order to bolster the surveillance state.

We know this from Biden’s March executive order: this is the goal. Put all the pieces together and you have the prospect of inflation without end for at least the next few years. Real income is meanwhile falling further and further — 18 straight months now, the longest decline in personal income on record.

The Fed is not our friend. It will cave at the first sign of major market trouble that impacts the most powerful. The actions of the Bank of England reveal precisely where this is headed. The war on inflation is theater, and the curtain will close just as soon as the right people start squealing from the balcony.