The Fed Is Not Serious

We see lots of hand wringing about the Fed’s intention to crack down on inflation. No more Mister Nice Guy! The party is over! Those money masters are going to clean up the balance sheet and teach the virus called inflation a thing or two! Oh sure, there will be a bit of pain in the short run but in the long run, we’ll have beaten back this beast and the dollar will stabilize again.

What we see here is theater. It’s nowhere near serious enough to tame inflation. The latest panic concerns the intention to raise rates by 0.75 percent, which will only feed the long tail of mortgage rates and other lending markets, thus restraining money expansion and giving the persistent price increases a solid bonk on the nose. Or so they say.

If the Fed were truly serious, there would be a lot less talking and much more action. We aren’t seeing that yet. Yes, the changes are dramatic but that is necessarily true given that for the better part of a decade, the Fed has been running a zero interest rate policy based on an economic theory from cloud cuckoo land. Any change in that is certain to cause shifts in the yield curve.

But will it tame inflation? Not a chance. The official CPI is running at 8.6 percent but unofficially it is running closer to 12 percent. The producer price index came out two days ago and it was widely reported to be 10.6 percent but a drill down on the data shows it is running 16.3 percent for final goods with some sectors (like international shipping) hitting 40 percent.

It is a truism of monetary policy that federal funds rates need to equal or exceed inflation rates to really begin to suck excess liquidity from the markets. We are nowhere near that, and it is clear why. If the Fed took inflation seriously right now, it would certainly be responsible for triggering the greatest depression since the event that earned that name.

Thirty-year mortgage rates are 5.25 percent but that’s the highest they have risen in 13 years. It doesn’t take that much to alarm markets that are wildly addicted to cheap money forever. It confuses commentators how housing seems simultaneously on the precipice of both boom and bust but that’s a result of inflationary chaos: rising prices do not necessarily mean higher demand and/or lower supply. It could just mean debasement.

Regardless, the Fed has a very very long way to go before it can demonstrate that it is serious about restraining inflation. Here is the federal funds rate from the Volcker peak to the Powell depths. That tiny blip at the end represents “tightening.” 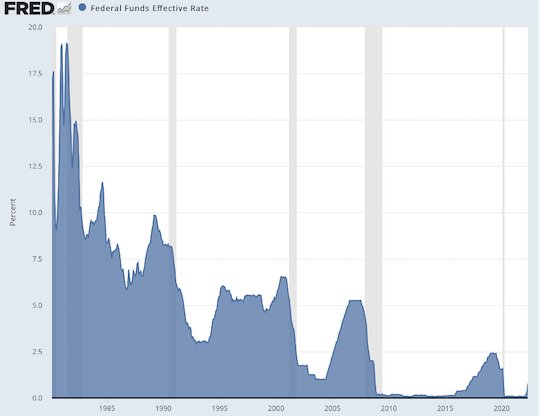 The Return of Reality

Maybe you have been feeling this way for a few weeks now, some sense that the artificial world of the last two or three years has just been exposed as a massive hoax. Now we are dealing with terrible pain. And that is very much true. The only question is how far do we have to go back in time to see where the trouble began.

My own vote is for 2008. Here were times when reality again presented itself in the form of a tremendous housing crisis that fed a financial crisis. Instead of just allowing the correction, the Fed acted with ferocity, buying bad debt all over the country and stuffing it into vaults. It seemed scary at the time and many people predicted some dire inflationary outcome. It did not happen mainly because of the great Bernanke trick: he paid banks to keep their new fake capital housed at the Fed rather than lending it out.

The unfortunate consequence of that “success” was to lead an entire generation of economists to believe that there was no real connection between the money supply, defined however you want, and the rate of inflation. They came to believe that so long as economic growth was on target, markets could absorb any amount of printing.

That was a highly dangerous presumption. But it is typical of our times, in which high-level minds are capable of believing just about anything even if the whole of human history would suggest otherwise. And this is precisely the key to understanding what is otherwise one of the great mysteries of our time: why did not even one establishment economist predict this?

Why Do We Pay These People?

The seeming success of 2008 instilled an incredible arrogance on the part of the masters of money and their cheerleaders. It led them all to believe that the traditional rules no longer apply. I watched all this unfold in real time over 14 years, as otherwise sensible thinkers drank the easy-money koolaid and put down any old fashioned theory that suggested there might be some relationship between money expansion and prices.

And yet, here we are today, with terrible things happening and no other explanation available except for the obvious point that the Fed dumped more than $6 trillion into the markets over the course of two years. It is not only a humbling moment; it is a humiliating one. You can search the archives of any top economics journal and not find one word of warning, not one hint of caution.

This is what it means to be totally blindsided. You can say the same about the politicians too. It’s not clear at all that anyone associated with the Biden administration had a clue about what its spending and printing would bring about and what the results of that would be for American life. Coming on the heels of the astonishing flop of virus control, the unleashing of economic crisis means the discrediting of the expert class for more than a generation at least.

How Bad Can It Get

Let’s just proceed under the old fashioned and probably slightly crude assumption that there is some relationship between the quality of money and the price level. How high do prices have to rise in order to wash all this excess liquidity out of the system? Let’s just overlay the two in one chart and see. Here is what we get: 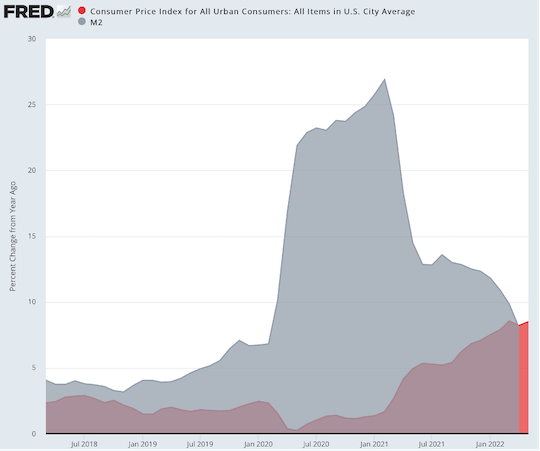 So you be the judge. Do you think this is finished or there is any prospect of taming inflation between now and, say, next year? Even if the Fed gets some guts and increases the federal funds rate dramatically — really dramatically — the damage is already done. We are going to live with this inflation for a very long time.

We are paying a devastating price for putting the economy and society in the hands of trusted experts. They have failed us miserably.

The Regime is Falling Apart

The backlash will not be all at once. It could be gradual and extend over many years

What Was Bent Has Broken

We need dramatic change and fast, if only to save the country and its ideals from these vagabonds who have wrecked so much so fast.

A moderate guide to small things you can do to protect yourself to a great degree.

The Deep State is proving itself impossible to train or deter, no matter how bad it gets out there.

The issue of failing plans from elites has vexed rulers from time immemorial. We live in such times today, arguably on a larger global basis than ever.

Our best hope is that the government is thoroughly rotten at doing everything. It has a tendency to screw up everything it touches.