The Pilots Lead the Rebellion

Did you miss a flight this past weekend? Southwest Airlines cancelled 1,900 of them, causing many thousands of people to languish in airports, scrambling for a way out. There were typically no cars to rent. They had to take Ubers to the closest hotel, hoping for a room but it was often the case that the hotels were full. Yep, it was total chaos for many, and a public-relations disaster for the airline itself.

Basically, it was a disaster. And it could not have happened at a worse time. Airlines are struggling on every front, barely recovering from 20 months of hell. This only discourages travel and it costs billions.

So I drifted over the Twitter account to see what the airline was saying. They said many flights were cancelled and delayed due to...weather. But this was also very strange because the weather map showed no signs of unusual weather at all. Clearly this was a lie. And anyone and everyone could see it.

And this little scene typifies life in America today. Public messaging these days is almost always a lie. The truth one has must tease out of clues. It must have been this way in the darkest times of the Soviet Union. All official sources explained away the disaster. You could only find out what was true by talking to people in whispers. Those whispers certainly do not translate into any honest telling within the mainstream press.

What is happening comes down to the vaccine mandate that affects all pilots, attendants, and every other worker at the airline. The mucky mucks at the head of the company believe that they are bound by the Biden vaccine mandate, even though the Biden administration has issued no regulations at all on private companies — only government agencies and contractors.

But the airline has accepted billions in bailout funds, and fears defying the government. The piper is playing the tune of the institution that pays. So Southwest is planning to impose these mandates on everyone starting the first week of December, following the lead of United Airlines. In this case, however, pilots and many other workers are refusing the vaccines due to natural immunity to the willingness to risk infection. They assume they will be fired. They are probably correct.

On Twitter, many people are calling this a “sick out.” It’s not exactly a strike as such. In fact, if they were striking to oppose the mandates, what they are doing would be declared illegal. Instead, they are merely taking sick leave, calling in one by one. They are being paid for the last month or two of their employment as a matter of their contract. Better to take that sick leave now, rather than lose it all later.

There are aspects of this that are indeed a strike. But no one can say so, especially not the company. As a result, we are all just pretending. Meanwhile, because the labor unions despise these mandates, other pilots and workers are joining the strike or, sick out. As I write, another 1,000 flights are being cancelled — and many consumers are cheering this because they know that the workers are fighting for fundamental rights.

Some features of this mirror the fictional story of Atlas Shrugged. In the fictional version, the attacks on capitalist producers became so egregious that many of them started dropping out of society, grinding the entire productive machinery to a halt. In coming up with this brilliant plot, Ayn Rand flipped the usual narrative. The communists had long hoped the revolution would be kicked off by a workers’ strike. Rand, in contrast, imagined a strike by capitalists. In real life, this is a real workers’ strike — but on behalf of the freedom to control one’s own body and life.

It’s certain that the Biden administration never anticipated the amount of resistance it is facing to the vaccine mandates. It turns out that many Americans like their freedoms and do not want to give them away. This is happening in huge swaths of American industry, affecting tech, health care, hospitality, and transportation. My inbox is flooded with sad and even deeply tragic stories of people being forced to choose between their income and their bodily integrity.

You can look through the New York Times cover to cover and not find a word about this. The media blackout is shocking indeed. But it’s not just this strike. We are not even being told about the outrageous and pillaging inflation that is affecting everyone and everybody. I was at the hardware store yesterday in the lumber section. Everyone was complaining about the prices.

I try to keep up with the price changes in every sector, but this one surprised me because I recall hearing about a month ago how the high lumber prices had gone away, as an illustration of how this inflation is transitory. So I looked it up. I was stunned to find the following chart. 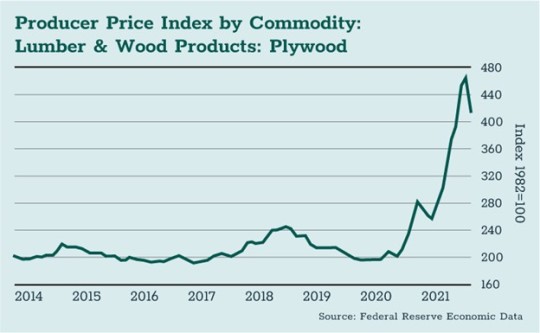 What we see here is a 120% inflation rate over the last 20 months, started from the lockdowns that shattered supply chains and sent home workers. This was Trump’s own doing. That was the initial disaster, but it got worse once The Fed started to print money as a substitute for production. That money printing is now making its way through the economy and putting upward pressure on everything. Houses that use lumber are now finding new highs to cover the costs associated with building.

And now let’s mention the gas price, which on the ground is moving up at a faster rate than we’ve seen in decades. Oil producers think this is great for business. It is not. The prices of everything are soaring, reducing the value of all dollars, including that which is earned from rising stock prices and dividends. We have here the makings of a classic hyperinflation: it feels like prosperity until you wake up one day vastly poorer than you were before.

Meanwhile, food prices, cotton prices, lumber prices, gas prices, housing prices, and everything you can name, are rising faster than in a generation, or two, or three. There is every sign that this is just the beginning. It’s going to be a very hard winter — heating oil is hard to come by — and next year.

The workers are indeed on strike but not for communism. They are striking for basic human rights and freedoms.

In my lifetime, we’ve never seen a conflict this intense between any state and the federal government.