The Progress of Entrepreneurial Knowledge and Learning

I suggest reading yesterday’s Daily Prophecy prior to diving into todays. Go here to catch up.

You’ll recall that Pooley warns that “2021 may be a different story.” It really depends on how COVID effected our velocity on the planet's learning curves.

We know that the printing machine is set to turbo. The question is will wages increase faster than prices. If so, time prices will decline.

Below is a chart going back to 1960 of 37 commodities tracked by the World Bank. We used GDP per Capita per Hour worked as the denominator to calculate time prices. What it indicates is that resource abundance has been increasing at a compound annual rate of around 4.8%, but it has been a roller coaster. 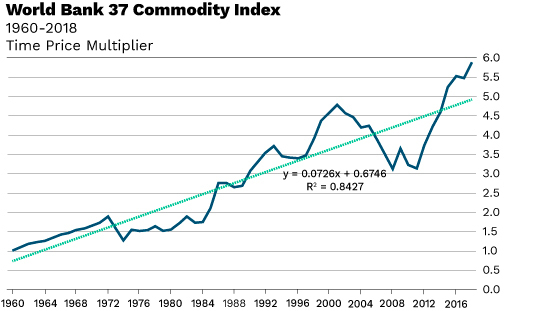 The 1970s pattern… [suggests] that prices may rise faster than wages, but wages will catch up. This wrenching period of inflation also spawns innovation through learning curves.

The oil shock and Nixon's August 15, 1971 abdication of the gold standard sent us into a steep decline. Looks like two years later we stopped the bleeding and started to recover.

Under Reagan we were moving back to the long run trend. I would argue it was the combination of freedom and stable currency. The end of the Cold War gave us a couple of boosts and then came 9/11 and the housing crash. We started to climb out in 2012 and had been doing very well until COVID.

COVID seems to have released a pandemic of inflation, a much greater threat to humanity's confidence in the future than a bad flu.

I would hope our internet economy will adjust to the new cash much faster than before, but I don't know.

If we can innovate value from all of the new learning generated in medicine, COVID could be a blessing. But our greatest threat is the fear and panic we've seen from our political class. Note that we have spent more to fight COVID than we did to fight WWII. Wars always generate inflation but can also create innovation if we don't restrict human freedom to learn.

Expect the next few years to have some rough seas in terms on monetary gyrations, but let's hope we can stay active on the learning curves. If we can, time prices should continue to fall, but we might see a repeat of 1972-1974 and 2000-2012. Our troubles could last for 2-12 years.

Prophetic words of wisdom from Gale Pooley. The key insight is that this is a global economy.

Since 1980, the Chinese saved world prosperity by growing three times faster than the U.S. measured by time prices, and Israel and Silicon Valley pioneered the new technologies that currently enrich our lives.

So why not fight against China?

The health of the state is always war. If the politicians can’t manage to launch real wars, they make do with spurious wars, as today against viruses and carbon molecules and inequality.

But real war is still possible. Hey, why not tweak and probe the Chinese communists on the nerve endings of their most avid national goal, Taiwan? Or jazz up the jihad against Israel, source of much of our innovation and technology?

But history tells us that even amid the fogs of war, the obnubilations of statist banks, and the darkness of time, power can rarely eclipse the progress of entrepreneurial knowledge and learning.

The Eruption of Non-Fungible Tokens (NTFs)

What will the US do with this crisis?