Vladimir Lenin was nothing, if not an ideologue and a revolutionary, probably the most successful one in history. He was a passionate orator and intellectual who imagined that his words could somehow bend the direction of history. Strangely, they did. One thing led to another and boom, he was in charge of the mighty nation of Russia. His Communist Party ruled all things. Nothing stood in the way.

Finally the question was presented to him: what should we do? His answer was provided in his 1917 monograph The State and Revolution. His goal was to “to organize the whole economy on the lines of the postal service…." Then he later gave a speech to the whole party in which he added that his goal for doing this was the “electrification of Russia.”

Great. Hundreds of years of socialist writing and agitation and it comes down to this? The real problem here is that the socialist had not fully thought through precisely how they would organize economic life after capitalism. They wrote hardly anything about the topic. Instead, they preferred agitating against existing realities and markets, highlighting the exploitation and unfairness of it all, without having ever really been called upon to provide a better idea.

But in 1917, Lenin’s hand was forced. He looked at the post office in the US and Europe and figured that these public services seemed to work just fine. Just make everything work like that, he said. So he unleashed hell on the country, confiscating private property and dismantling existing enterprises. Within a few years, most of the country was starving. It was an unspeakable calamity. It took another 70 years to walk that back and finally restore rationality.

I’m reminded of this history of horror in light of the new announcement from the US Post Office. We’ve been through 20 months of incredible slowdowns in mail delivery due to lockdowns. There were times last winter when just getting a letter to a few towns away took weeks. Mail from across the country was running 30 to 45 days late. Packages were slightly better but the very thing over which the post office claims a monopoly was clearly broken.

Now that we are finally back to normal, the new Postmaster General has made a shocking announcement. They will dramatically slow down mail delivery for 40% of mail, which I assume means 100% of mail. After all, the bureaucrats are completely unaccountable as to whether they do a good job or not, so it is not clear that it really matters. What they are doing here is announcing that the experience of last year is the new normal.

Meanwhile, they will increase prices. Very interesting. It’s the opposite of private enterprise actually, which lowers prices to attract business. Because there are certain delivery services that the post office monopolizes, they can reduce the quality of their services while increasing prices.

What other industries do this? Public schools. American health care. Pharmaceutical companies. Essentially everyone who is protected against competition is in a position to squeeze people and extract ever more money with ever worse service.

The Postalization of the US

Because of the dark history of Lenin and the post office, my immediate thought upon this announcement was that it was a bad omen. We know that the socialists have long admired the institution. Even after the Soviet disaster and the failures of central planning in every country the world over, they still long to try it yet again. This is what they want. Maybe. Actually it’s not clear.

We are faced today with a daily barrage of confirmation that the most dire predictions are much closer to being correct than those who assured us that everything will be just fine. Supply chains are fine, they said. Just wear a mask and get a jab. Inflation is purely transitory. All you nervous nellies out there are just being hysterical.

And yet daily, we get non-stop wake up calls. Today we learn, for example, that The Fed’s favorite inflation barometer — the core personal consumption expenditures price index — just broke through a 60-year record. Not 30 years. Sixty years! Have a look. 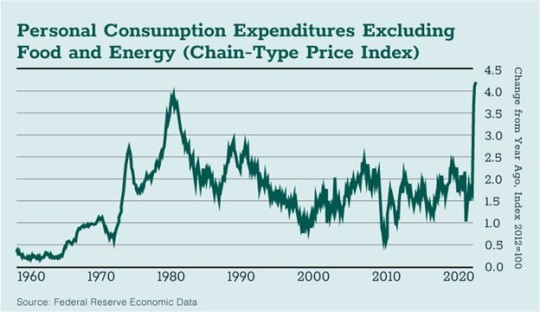 This disclosure hardly made the news at all. And yet, this is the measure that The Fed itself prefers as the means by which to assess the dangers out there.

Meanwhile, the presidential spokesperson has made a statement that no business should ever pass higher costs onto the consumer. What precisely are they supposed to do with them? I would swear that the Biden administration is under the impression that every private business has some vault in the backroom with a billion dollars that it is just hoarding and so the regime should be determined to get it and redistribute it — a vision not unlike the communist crazies that have ruined the world many times in the past.

It’s not just the post office. Progress has slowed, service is dying, business is being throttled, and the regime is gaining power. We see where this is headed by looking back at Lenin’s glorious rule of 1917. The end is not pretty. Fortunately, there is still time to escape repeating this history.

Lose the fear and we find our freedom again