Every day, news reporters, traders, and workers of all sorts the world over wake up to do their work as they always have. Part of that requires that everyone pretend that life is normal, fixable, and more or less stable. All of this is temporary. It will come and go and really not be that bad.

Strange, isn’t it? Human beings have a hard time adjusting to disaster, in their decision-making and even in their mindset. Reporters have to do their jobs as they are trained. Traders too. Everyone does. They please their bosses. They don’t sound alarms. They don’t scream and yell as they probably should.

But there is a moment in the day when the work is done and perhaps a cocktail comes out or the dishes are washed and the kids are in bed and the room falls silent. At this moment, millions and billions of people the world over know it. Disaster is all around us. We are just pretending otherwise, simply because this is what we have to do.

And thus the peoples of the world adjusted and will continue to do so as the fundamentals decay and rot, and all the old rituals and signals of life as we once knew it fades further into memory. We know that what we do is routine and we should do otherwise but we don’t know what that otherwise is.

Enough with the dreary existentialism. Let’s talk about life in a one-bedroom apartment in London. The price of energy for heat has nearly doubled, seemingly overnight. Truly, it took months but it has felt like one day to the next. The energy bills will be approaching a substantial portion of the rent itself. And the forecast — which one has to do because that’s how energy markets work on the consumer end — is showing a doubling and doubling again.

Here is what Goldman Sachs is seeing. 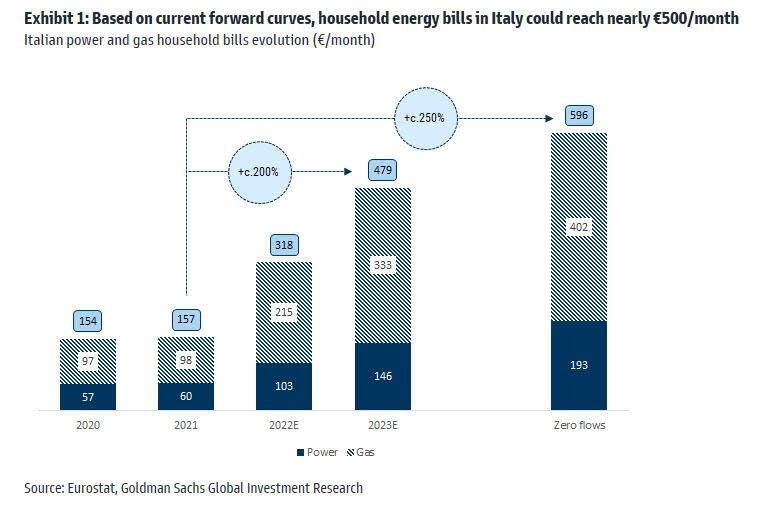 Small businesses cannot function under these conditions. “Tom Kerridge, the celebrity chef, revealed that the annual energy bill at his pub has soared from £60,000 to £420,000 and warned that ‘ludicrous’ price rises left the hospitality sector facing a ‘terrifying landscape’,” reports Telegraph.

This is all running wildly ahead of consumer prices generally. This is only through June. We are already approaching 100% inflation in energy. 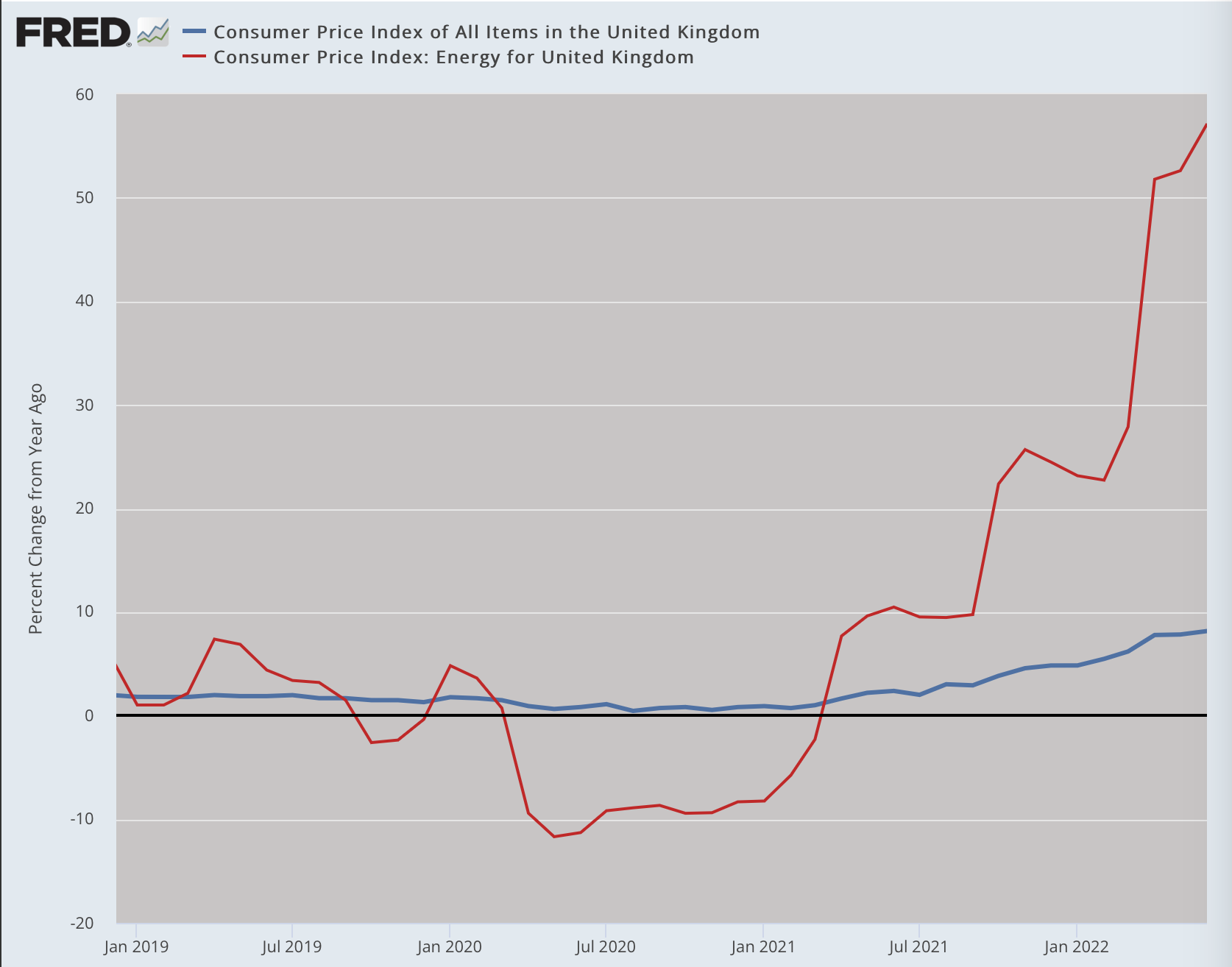 Many will need to close up shop. The new Prime Minister, who calls herself a conservative, has capped price increases for consumers while pushing the largest spending bill to bail out energy companies ever. It truly seems like she had no choice. Yes, that’s what they all say, but in this case, it might be true simply because otherwise, the entire nation would totally fall apart.

It could happen anyway.

Everyone wants to know why. As always, there are a number of factors. The sanctions on Russia for its struggle over the borders of Ukraine were unbearably stupid. They have driven up the price of energy all over Europe and the UK. But even then, Russian sources only about 3% of the UK’s energy needs.

Another culprit is the fanatical attempt on the part of the government to convert a fossil-fuel economy to one powered by the wind and sun. For reasons of climate change, we know how good politicians are at controlling the global climate by taking away your consumer conveniences.

But really even these two factors would not be enough to cause this level of carnage. The real root of the problem is monetary: the wild currency debasement starting in March 2020 and continuing through lockdowns has wrecked the place. How could they not see this coming? It’s ridiculous.

And it happened the world over. The chart below that I put together looks messy but it tells the whole story of how one generation of central bankers wrecked the world. The key on the left tells you monetary inflation rates and the key on the right tells you price inflation rates. One lags the other by 16-18 months. I’ve color-coded it so that you can see the relationships.

This covers the U.S. (green), the EU (red), and the UK (blue). You can see the massive oceans of paper being pumped out to cover up for the egregious evil of lockdowns. Do you remember those days when governments the world over imagined that they could somehow shut things down while keeping the data looking pretty with the printing press?

My god, look what they did! 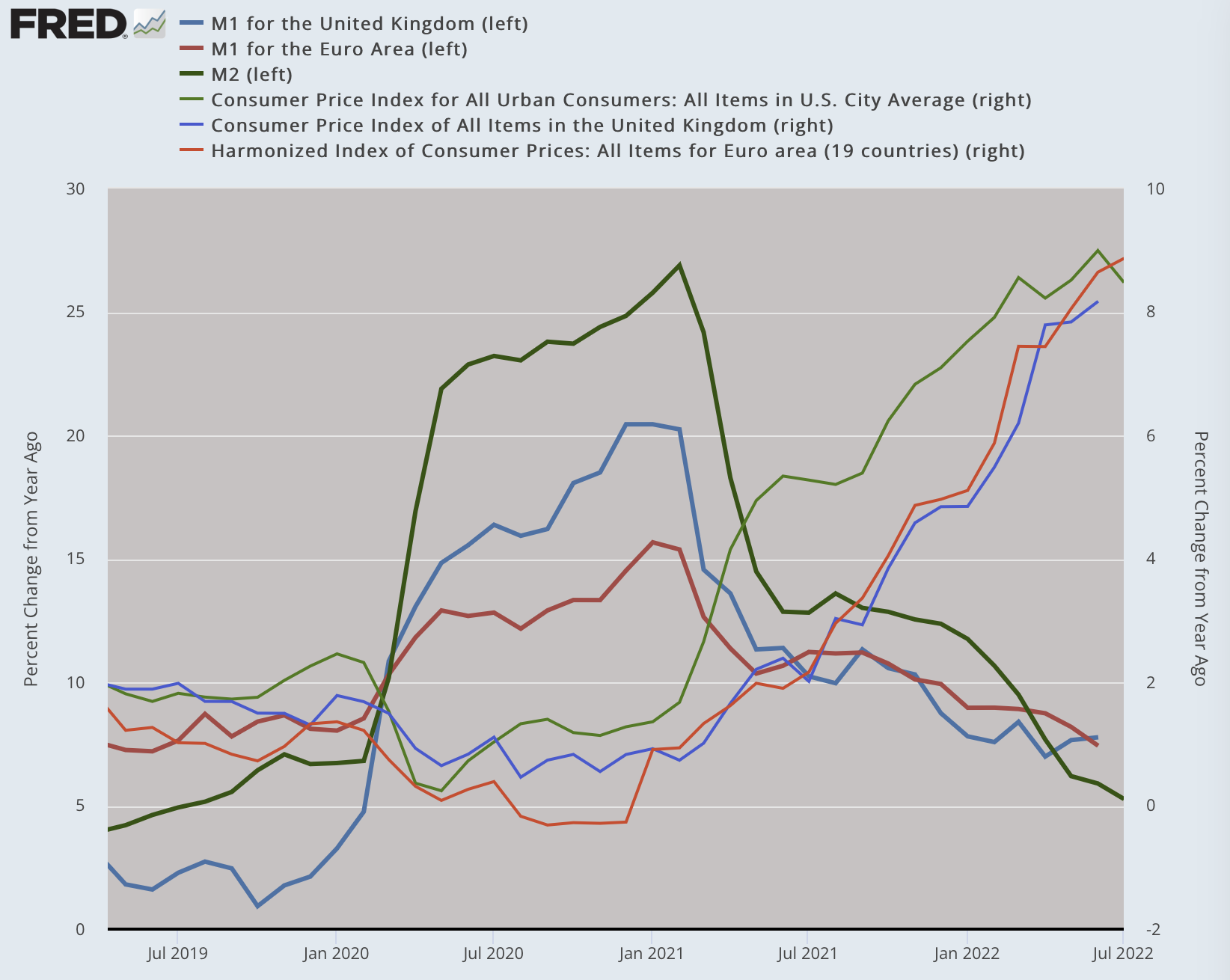 My friends in the UK are truly panicked. They want to come to the U.S. just to get away. But many of my friends are rebels and did not accept the vaccine because they are healthy and under the age of 80. They rejected the jab. Now they cannot come to the U.S. because the U.S. is still imposing rules that forbid travelers from foreign countries who are not vaccinated from getting across the borders.

Of course, if you are a part of a traveling mob ushered across the southern border by drug lords, that’s another matter. No vaccination necessary.

This is the essence of policy in America today. Truly people are being locked out of our country for being insufficiently loyal to Pfizer, which seems to be the real government here at home.

The most striking feature of that which afflicts the UK today is the sheer speed of it all. One day life was normal and then suddenly the bills were through the roof. No one could explain why. It was some kind of mystery, and extremely disorienting.

Why energy, for example? Well, inflation strikes in strange ways. It gravitates to the thing most vulnerable to price hikes. This could be dictated by fashion or policy or both. But when it happens, no power can stop it.

The story of going from normal to double and triple prices, forecasting to go much higher, reminds me of books I’ve read about Weimar, how things were fine until suddenly they were not and life itself took a shocking turn.

Until recently, Americans have looked at the chaos abroad and thought oh that’s what these weird foreign people do, just strange stuff with unstable governments and unsound financial systems. And yet right now it is happening to our mirror country across the pound, a place that we think of as cousins with a Queen.

The remarkable thing is that the UK’s monetary policy was not as bad as the U.S.’s own. The only difference is that there is a larger international market for dollars than for pounds. This allows the Fed a bit of breaking room to do more damage.

But can it happen here? Yes, certainly, and it could happen before year’s end. The policies of the last three years have created an incredible powder keg. No one knows when it will go off, and no one knows what to do when it happens.