There Is No Good News on Inflation

It has been fascinating to watch in real-time as the major media has prepped for recent CPI reports. They must have their stories ready to catch the traffic wave. A main theme has emerged recently: inflation is better now. All economists say so. We’ve peaked. Calm down. We are done.

The headlines all said that inflation clocked in at 8.3%, a decline but not much, but perhaps enough to spin a good direction. But then as the press release from the Department of Labor came out, those headlines had to be revised. The difference from the March figures, in this case, seems insignificant.

Thus, did all the headlines have to change? From happy to mildly sad. The markets responded accordingly because if inflation is just as bad as before, the Fed would still have to tighten and might even get more aggressive. Sad to say, but Wall Street doesn’t like tight money.

So of course markets fell, as a new line emerged. But then the headlines flipped again to go the other way. Suddenly we were being told that inflation eased! Oh sure. Have a look at the core rate: it was way up.

The other problem was gasoline: the April fall in price was the major driver of the softening of inflation. Trouble is that in real-time, everyone knows that this trend has already flipped in the other direction.

Have a look at the detailed chart and direct your eyes to the far right column that provides unadjusted year-over-year numbers. Yikes. 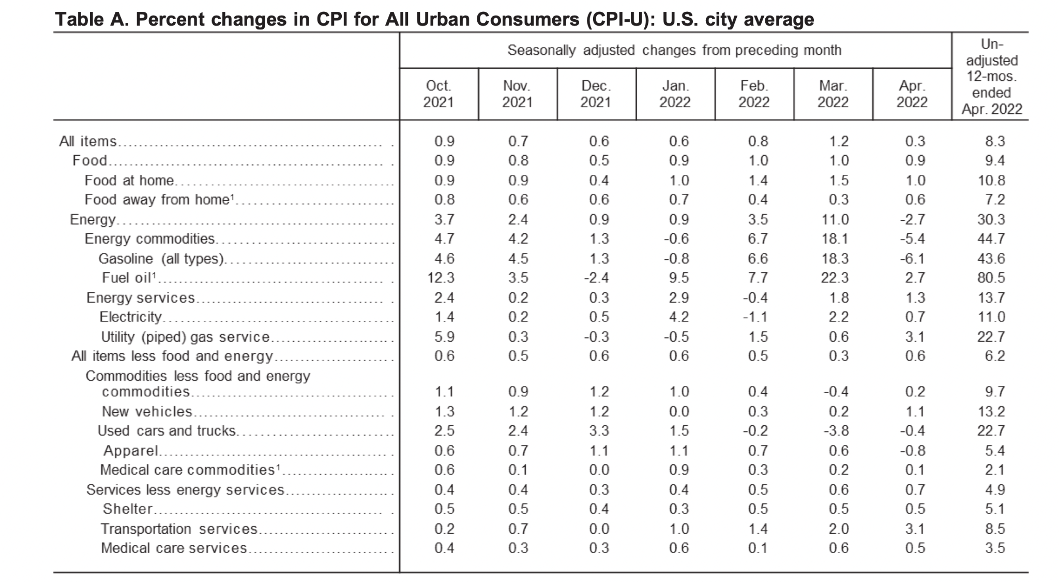 Here you can see how the fall in gas prices in April drove down the overall figures. The heck of it is that this comes out two days after gas prices hit record highs all across the United States. This means that whatever happened in April — which the CPI measures — doesn’t matter at all in May. Have a look at the 18-month price chart on gas.

This fact alone explains why markets weren’t too excited about this report. Instead, we got the New York Times assuring us that this is only because it takes a long time for inflation to wash out of the system. Just calm down everyone and relax! Everything will be fine!

Here’s the problem: absolutely no one knows this for sure. How can we find out what the future of inflation looks like? There is no certain way but when in doubt, have a look at the money supply. In February 2021, a month after Biden took office, M2 was increasing 27.5% annualized, which is nothing short of astonishing. Today, the increases are running at 8.6%, which is about four times as high as the Fed claims to want with its target rate of 2% inflation.

A good rule of thumb is that inflation shows itself 18 months following the bout of printing. That’s precisely what happened. Here we are at 15 months following peak printing and we are experiencing incredible increases. It could be another three months before the peak of printing is washed out. Then we still have to eat the policies for the full year following.

What this suggests is that we could be looking at another year and a half of this mess.

Biden has tried to get ahead of the news recently with big speeches on inflation. They have been deeply painful speeches`, filled more than usual with his verbal tangles, misreadings of the teleprompter, and audible corrections. His brow furrows each time he makes a mistake. Usually, this sad habit inspires just a tiny pang of sympathy for the old man. We’ll all get there at some point.

However, we are in a crisis. The sympathy bit only gets you so far. He stood up in front of all the American people and said things that were obviously incorrect. He said inflation is caused by two things, the virus and the bad man in Russia.

The virus caused nothing. In fact, it was the lockdowns that broke the world. As for Putin, the bulk of the gas price increases already happened before the invasion of Ukraine.

At this point, the administration knows for sure that no one believes what they are saying. They are saying it simply because they have to say something.

Let’s just presume that we are in for the long haul here. Where does the smart money go? Gold responded in a healthy way to the news this morning, so that’s something. Commodities are never a bad idea in such times. Usually the same is true for real estate, though the markets today seemed pretty frothy.

Bitcoin has been taking it on the chin lately but I don’t actually take that very seriously. I’ve seen this type of thing too often. We have dramatic declines that wash people out of the market and then this is followed by a rally some months later that instills a profound sense of regret in those who jumped ship. It’s likely to be the same this time.

Because people are so forgetful, here was the price of Bitcoin when the lockdowns happened: $7,096. 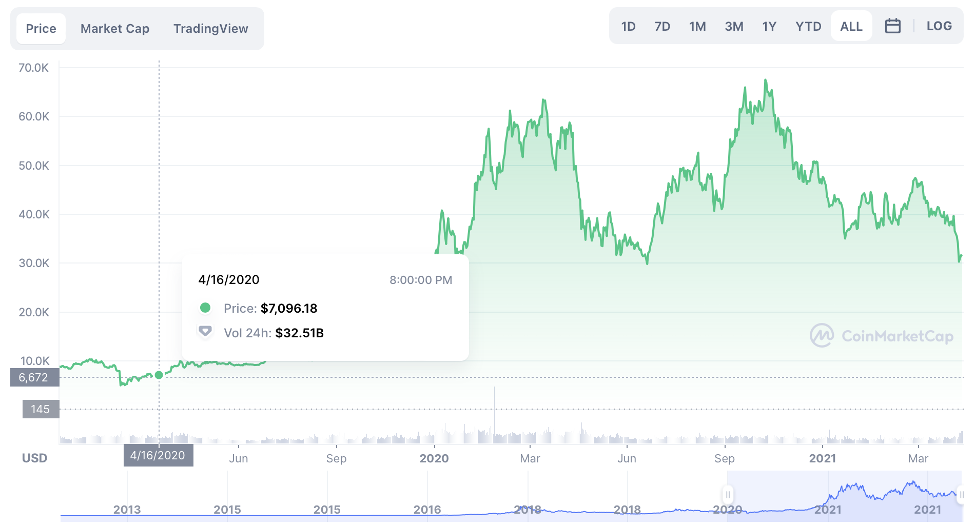 In other words, anyone who saw the lockdowns as a disaster and Bitcoin as a safe haven, despite the recent fall, would have made a 342% return over these 26 months. That’s a stunning return.

It just shows you how many illusions can be woven by following media spin and only looking at the day’s news. The months and years ahead will reward those who think for the long term.

We’ve just seen the first major failure of an established stable coin: TerraUSD. Stablecoins are pegged to the dollar and perform two functions: they enable fast payments, much better than the banking system, and they give a return to the holdings of tokens who agree to back the coin. That works great until it doesn’t. Withdrawals prompted by a price correction led the coin to lose its peg. It is now toast.

Two things here: it is not a risk to use a stablecoin to transfer money. It is a risk to leave your money with a single company in hopes of a payoff to be part of the peg. That distinction is not always obvious to people.

Sadly, this floperoo will be deployed by regulators to crack down further on stablecoins, because that is what they want to do in order to eliminate competition with the banking system and prepare the way for the release of Fedcoin.

They are embarking on a monetary reform that will bring about a fundamental change in the monetary system and the relationship of citizens to the state as it operates through the financial system.

These times more and more remind us all of some dystopian novel.

Easy On the Butter: We Aren’t Rich

You look out the window and drive around today and things might seem normal on the surface. But look beneath that and you see nothing but rot.