Here we go yet again with claims from the White House and its allied media outlets that inflation is no longer an issue! These people truly do believe in the power of propaganda, don’t they? And maybe they are right to do so.

Frankly, I’m losing faith that the American people have the capacity to think for themselves. When every media outlet is screaming that we’ve been saved from inflation by the Biden administration, maybe lots of rubes truly believe it.

Even when all evidence before their eyes points otherwise.

The Power of the Dollar

Before getting into the details of the latest CPI report, I will confess that I’m not feeling the high prices right now. This is because I’m in Mexico City. Most things are half or less what you would pay in the U.S. Going out to eat here is a dream come true. High-end hotels you can get for a song. The liquor is cheap. The food is glorious.

Being here for just a few days is a reminder of what the good life is like. You can live well. You can do stuff out and about and still save money. People are friendly and well-adjusted. The food is healthy. I don’t know what to say: life is grand!

It’s a blessing to leave the U.S.!

A lot of this is due to the strength of the dollar internationally. If you are buying other currencies with dollars you are doing great! This is what confuses people. The dollar is very strong right now in terms of other currencies.

However, it is extremely weak domestically in terms of goods and services.

Normal people these days apparently cannot be expected to keep this straight in their minds! And that’s absolutely pathetic. It makes them subject to propaganda.

Now to the CPI

When the CPI came out yesterday, with all the predictable blather and nonsense that came with it. This keeps happening these days: we know one thing – in this case that our purchasing power is being slammed – but regime spokesmen keep saying we are wrong.

The top-line number is 6.5% for the year and down 0.1% for the month. That seems good or at least better. Therefore, of course, the media spin on awful inflation numbers is the same as it has been for the last year: it’s not an issue! It’s going down! Stop complaining! If you complain about inflation, you are probably an unmasked anti-vaxxer with a gas stove.

Here’s the New York Times: “Inflation continued to slow on an annual basis in December, providing welcome relief for American households and a positive development for policymakers at the Federal Reserve and White House.”

Now, ask yourself: in what world is it “welcome relief” to be paying 12 percent more for groceries overall this year than last? It’s absolutely nuts and reveals just how out of touch the NYT truly is.

On what basis can the Times claim that this is “welcome relief?” Well, the gas price is down dramatically from a year ago – which is a bit of a statistical artifact if you think about it. In June of 2022, you were paying upwards of $5 per gallon.

That very intense pain is why today’s $3.25 is truly a relief. To be sure, if you compare it to the $1.75 of March 2019, it’s not so hot. If you step back and look at it, for the price at the pump to have nearly doubled in 3 years, that’s pretty darn awful. It’s the way we calculate prices that makes it all seem fine.

So how it goes? It’s the frog boiling slowly in water.

Or consider this analogy.

If you put on 50 pounds last month and only 5 this month, but you are still 200 pounds heavier than 3 years ago, you can congratulate yourself if you so choose. But let’s not indulge the illusion that you are well on your way to health.

So much of this inflation issue has been stuck in a mire of language obfuscation. We say it is improving because the depreciation of the currency is getting worse more slowly.

This is a bit like falling in a deep ditch and it starts raining heavily and the water is coming up to your neck. The person above assures you that it is raining far less hard this hour than last. Your first thought might be: I’m not entirely sure that this person fully understands the issue I’m dealing with here.

If the very existence of the inflationary problem is a point of controversy, the issue of causation is even more so. We still have not gotten a clear admission from anyone that all of this traces to the catastrophic Fed policy from the pandemic, during which time, the Fed printed $7 trillion in a rather short period of time while driving interest rates back to zero, with absolutely no plan to keep the hot money off the street.

In fact, it was the opposite. This was fresh money dropped from helicopters. What did they think would happen? This is entirely due to government and Fed policy and nothing more. It was not Putin. It was not the pandemic. It was not only supply-chain breakages. It was old-fashioned expansion of money and credit to fund a profligate government.

I was just going through a great book by Thomas Jefferson’s favorite economist, the Frenchman Destutt DeTracy. Jefferson translated his 1817 book A Treatise on Political Economy.

It’s a wonderful book. DeTracy explains in detail how a government that spends what it doesn’t have, and issues new coins with fake names to pay the debts, is engaged in the outright robbery of the people, doing to them what taxation would do but in a sneakier way.

“All paper money is a frenzy of despotism run mad,” he wrote and explains why in detail. Jefferson adored his thought, and there is nothing about the present inflation that would surprise either of them. This is just another case of lost knowledge: a fact about economics that was well-known in the 18th century but which is obfuscated and buried in the 21st century. In this, economics has a lot in common with virology and immunology, not to mention climatology.

The whole of society today is being misled by experts who know nothing about deeper wisdom beyond their woke educations and have every financial incentive to remain as ignorant as possible. This is simply because nothing is worse for a professional career in these times than to discover and then proclaim the truth. That is a sure path to ruin.

The Federal Reserve was created in 1913 with the intention of ending the monetary chaos of the previous period and guaranteeing a sound money and banking system. It was only a few years later when the power to print was massively abused to enter the Great War and slaughter Americans, who came back after the war depressed and drunken.

That in turn led to Prohibition, which gave rise to crime families, and violence, which led to cries for more government.

The Fed was then deployed in service of the New Deal and another war, followed by the Great Society and so on it goes. Thus, since 1913, the dollar then is worth about 3 cents today: the responsibility belongs entirely to the experts who have managed this system. 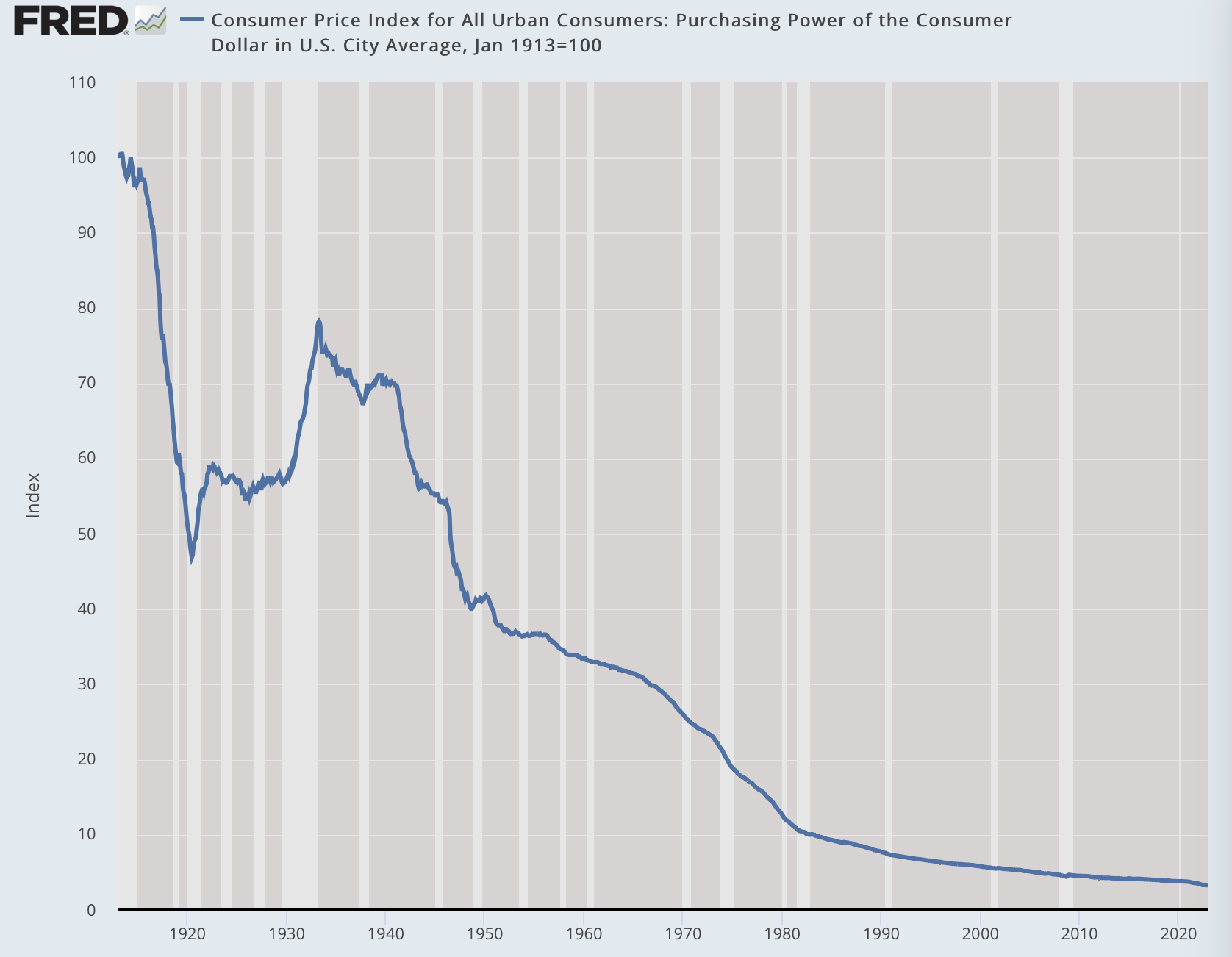 The Fed absolutely must be unplugged. It proves too much of an occasion of sin for politicians, just as it did with Covid. We might only improve the current inflationary environment that paves the way for something much worse. The only real protection for the American people in the future will be to completely abolish the beast.

That’s not going to happen of course. Mexico is looking better and better.