Thanks to Kent CLizbe for the tip: CDC director fights back tears as she warns of soaring COVID-19 cases: ‘Right now I’m scared.’

Nice, too, to see the oligarchs picked a strong woman to lead us through this government-generated crisis.

Too bad they didn’t let her look at her own data before she broke down, which is below.

Reads: “NEW – Biden admin is set to launch a #COVID19 passport that Americans must have to engage in commerce and would track Americans that took the vaccine (WaPo).”

The love of money is the root of all evil. I believe it is IBM, Microsoft, Oracle & Salesforce pushing this. To guarantee profits in perpetuity. The oligarchs running Biden (who, yes, is still alive) have even admitted the push for the passport is coming from them.

Nice to know you’ll be tracked everywhere you go, though, isn’t it? Saves memory by off-loading it to corporations, who love us.

We’ve made Mark of the Beast jokes so often that the comedic effect is dulled. But if they get away with it for this one small disease, a vaccine for a not very dangerous bug, the “passport” will soon be expanded to other distinctions. Including the aforesaid beastly mark. There hasn’t been a slippery slope yet our rulers haven’t jumped on with glee.

Say, would you be able to do on-line banking without a vaccine passport? Maybe not. Say goodbye to your money.

It’s not just the oligarchs. The cowardly will demand the passport, too. Demand you get it, I mean. Cowards need to “feel” safe above all things. And they don’t care what they have to make you do to guarantee their feelz. You might recall the “war” on terror led to body scanners at airports and other indignities, such as computer tracking of your whereabouts by cell phone. Thanks, NSA! All of which was welcomed by cowards who wanted to feel safe.

We’ve all read, and seen, historical examples of citizens welcoming and participating in bloody tyranny, always with the moral lesson that you, the viewer, would never allow yourself to fall that low. But its so easy: 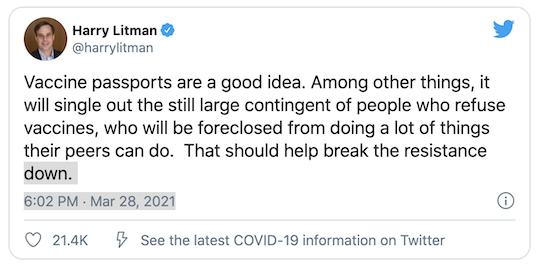 There is some good news about this. 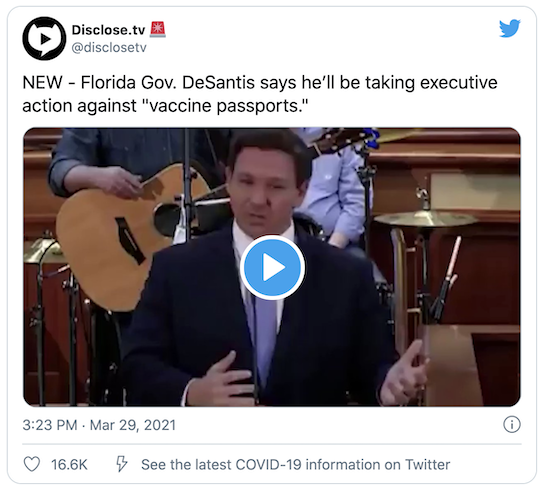 If enough rulers can recall their duty, the passport will fail. If you, too, remember yours, and refuse to use it when buying at Woke Coffehouse and MegaloWalMart, it will fail.

But if you say “What’s the harm?”, it will succeed. Wait and see how.

Texas District Judge Upholds Austin Mask Mandate “Travis County remains committed to following the science and the advice of our health experts,” said Andy Brown, Travis County judge and chief executive. “Today’s court ruling allowing the Health Authority’s rules to remain in place and keep the mask requirements for businesses puts the health and safety of our public above all else during this pandemic.”

Andy Brown is a liar, as is typical for our beloved rulers. Here’s the plot which shows “the” science.

They also wheeled out Biden to say “Please restore your masks” to the states that realized they were useless.

A new set of Computational primitives and protocols…

What will the US do with this crisis?